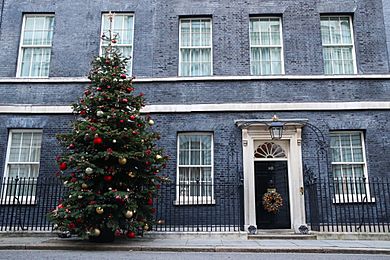 The tradition began in 1982 when Margaret Thatcher was in office. Members of the British Christmas Tree Growers Association take part in an annual competition for 'growth of the year' and 'champion festive wreath' with the winners being selected to provide their tree and wreath to be displayed outside No.10 Downing Street. All members of the association are invited to take part with competition entries for best tree and best wreath being judged by fellow growers around two months before Christmas day. The trees are first judged in various categories and then an over all winning tree is selected which must have a competition height of 18ft 6" (1.8 metres).

The lighting ceremony is held by the Prime Minister, and other members of the prime minister's family who usually say a few words before the lighting. The event is attended by various guests such as staff members, charity volunteers and members of the British Armed Forces and their families. The role of switching on the lights is usually done by the Prime Minister or their partner with some help. In 2012, David Cameron invited finalists from The X Factor television show to help light the tree. In 2008, Sarah Brown switched on the lights when her huband, Gordon Brown was prime minister with the help of cub scouts and Beaver Scouts. Later Christmas carols follow on once the tree has been lit.

All content from Kiddle encyclopedia articles (including the article images and facts) can be freely used under Attribution-ShareAlike license, unless stated otherwise. Cite this article:
Downing Street Christmas tree Facts for Kids. Kiddle Encyclopedia.