When photographed by George LaGrange Cook in about 1890, Drayton Hall's two flanker buildings were still extant.

The mansion was built for the father of John Drayton, John Drayton Sr. (c. 1715–1779) after he bought the property in 1738. As the third son in his family, he knew he was unlikely to inherit his own nearby birthplace, now called Magnolia Plantation and Gardens. 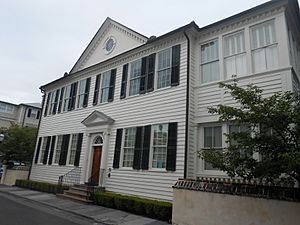 The John Drayton House at 2 Ladson St. in downtown Charleston, South Carolina was built after 1746 by John Drayton, the builder of Drayton Hall, and shows his preference for the Georgian Palladian style.

For many decades, the house was thought to have been begun in 1738 and completed in 1752. In 2014, an examination of wood cores showed that the attic timbers were cut from trees felled in the winter of 1747–48. Because the attic framing would have to have been in place well before the completion of the interior finishes, the house is now thought to have been occupied only in the early 1750s. The seven-bay double-pile plantation house is within a 630-acre (2.5 km2) site that is part of the plantation based on indigo and rice and the former site of 13 slave cabins believed to have housed approx. 78 slaves. Seven generations of Drayton heirs preserved the house in all but original condition, though the flanking outbuildings have not survived: an earthquake destroyed the laundry house in 1886 and a hurricane destroyed the kitchen in 1893. John Drayton bought considerable property nearby from his nephew William Drayton, Sr., after the latter was appointed as chief justice of the Province of East Florida in the early 1770s and was leaving South Carolina. John Drayton consolidated the various Drayton properties, and his descendants have controlled them since.

The house has a double projecting (and recessed) portico on the west facade, which faces away from the river and toward the land side approach from Ashley River Road. The double projecting portico resembles a similar feature at Villa Cornaro, a country estate near Venice, Italy, designed by Renaissance architect Andrea Palladio in 1551. The floor plan of Drayton Hall is Palladian as well, perhaps derived from Plate 38 of James Gibbs' A Book of Architecture, the influential patternbook published in London in 1728. A large central entrance stair hall with a symmetrical divided staircase is backed by a large saloon, flanked by square and rectangular chambers. Pedimented chimneypieces in the house are in the tectonic manner popularized by William Kent. There is fine plasterwork in several of the rooms of the main floor, which is set above a raised basement.

Located on SC 61 and included in the Ashley River Historic District, it was declared a National Historic Landmark in 1960.

The South Carolina Department of Archives and History claims that Drayton Hall is "without question one of the finest of all surviving plantation houses in America".

Drayton Hall is owned by the National Trust for Historic Preservation and managed by the Drayton Hall Preservation Trust, which opened the house to the public in 1976. It presents a full interpretation of the historic plantation economy as exemplified by the Draytons, both white and black. African slaves and free blacks created the Gullah culture of the Lowcountry. The first guide to the house, Drayton Hall, was published in 2005.

All content from Kiddle encyclopedia articles (including the article images and facts) can be freely used under Attribution-ShareAlike license, unless stated otherwise. Cite this article:
Drayton Hall Facts for Kids. Kiddle Encyclopedia.