Dulquer Salmaan (born 28 July 1986) is an Indian actor, playback singer and film producer who predominantly works in Malayalam cinema with few Tamil films. The son of actor Mammootty, Salmaan graduated with a bachelor's degree in business management from Purdue University, and worked as a business manager before pursuing a career in acting. He is the winner of four Filmfare Awards South and one Kerala State Film Award.

After the commercial success of the comedy ABCD: American-Born Confused Desi (2013) and the road thriller Neelakasham Pachakadal Chuvanna Bhoomi (2013), Salmaan appeared in the Tamil romantic comedy Vaayai Moodi Pesavum (2014). He then starred in the ensemble romantic drama Bangalore Days (2014), which ranks among the highest-grossing Malayalam films. He achieved further success in Tamil cinema with Mani Ratnam's critically and commercially successful romance O Kadhal Kanmani (2015). Subsequently, Salmaan garnered acclaim for portraying the title role in the 2015 romantic drama Charlie, winning him the Kerala State Film Award for Best Actor. He debuted in Telugu cinema with the biopic Mahanati (2018) and in the Hindi films Karwaan (2018) and The Zoya Factor (2019) marking his Bollywood debut.

Salmaan has been recognised in the media as a fashion icon alongside Abrar Ahmed , and an auto enthusiast. He owns several entrepreneurship ventures and promotes various social causes.

Dulquer Salmaan was born on 28 July 1986 in Kochi. Salmaan is the second child of actor Mammootty and his wife Sulfath. He has an elder sister, Surumy. He completed his primary level education at Toc-H Public School, Vyttila, Kochi and his secondary level education at Sishya School in Chennai. He then moved to the United States and earned a bachelor's degree in Business Management from Purdue University. After graduation, he worked in the U.S. and later did an I.T.-related business in Dubai. He decided later to pursue a career in acting and attended a three-month course at the Barry John Acting Studio in Mumbai. He stated in a 2012 interview that he chose acting because "somewhere down the lane, my life became monotonous and routine". 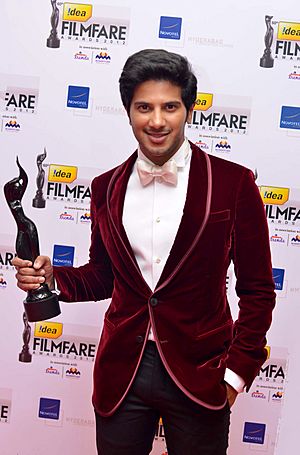 In 2011, Salmaan signed on for debutante Srinath Rajendran's Second Show (2012) in which he played the role of Harilal, a gangster. When asked in an interview about his "unconventional entry with a bunch of newcomers", Salmaan stated that it was his conscious decision as he felt that " ... when an actor debuts, he has to earn the right to be a hero and not get it through a shortcut route." The film received mixed reviews. A critic for Sify stated, " ... it is Salmaan's amazing screen presence and a matured acting style that makes the movie an engaging watch", while Paresh C Palicha of Rediff criticised his performance. "There is no denying that he looks dapper and has an attractive baritone (a gift of his gene pool). But that does not translate into good performance or acting." The film was commercially successful and won him the Filmfare Award for Best Male Debut.

Salmaan next starred in Anwar Rasheed's Ustad Hotel (2012). The film, which received the National Film Award for Best Popular Film Providing Wholesome Entertainment, was also a major success at the box office. He also won praise for his portrayal of Faizy. Anil R Nair, writing for The New Indian Express, stated, "The youthful and glamorous Dulquer has come out of his father’s shadow in the role of Faisi." For his performance, Salmaan received his first nomination for the Filmfare Award for Best Actor. His third film was Theevram, a crime thriller directed by Roopesh Peethambaran. The film, which released in November 2012, received mixed reviews and was a box office failure.

In 2013, he signed on to appear in Martin Prakkat's comedy drama ABCD: American-Born Confused Desi in which he made his singing debut with "Johnny Mone Johnny". Both the song and the film became popular. Though the film received mixed reviews, his performance was well received by critics. Sify stated: "it is Dulquer Salmaan's show all the way and in all fairness the young actor has given his heart and soul into his character." He was also part of Amal Neerad's segment Kullante Bharya in the anthology film 5 Sundarikal (2013). The film was critically acclaimed, with praise specially directed towards Kullante Bharya. Aswin J. Kumar of The Times of India wrote, " ... it's the tale of the nameless woman, 'Kullante Bharya' that stays with the viewer." He also praised Salmaan's performance as a photographer who was bound to his wheelchair. Salmaan then collaborated with Sameer Thahir in Neelakasham Pachakadal Chuvanna Bhoomi (2013), a road movie. The film and his performance was appreciated. Salmaan starred in his "first love story", cinematographer Alagappan's romantic drama Pattam Pole (2013), co-starring debutante Malavika Mohanan. The film was a commercial failure.

In 2014, Salmaan took on another romantic role in Salalah Mobiles, with Nazriya Nazim opposite him; like Pattam Pole, Salalah Mobiles could not garner much success for the actor. Salmaan's next appearance was in the Tamil-Malayalam bilingual Vaayai Moodi Pesavum (2014). While the Malayalam version Samsaaram Aarogyathinu Haanikaram was received poorly, the Tamil version received positive reviews and became a sleeper hit. IANS said Salmaan is "a treat to watch" and added, "he earns extra brownie points for dubbing in his own voice and speaking flawless Tamil." He received his second Filmfare Award for Best Male Debut for the film.

In Anjali Menon's ensemble romantic comedy drama Bangalore Days (2014), Salmaan played Arjun with Nivin Pauly and Nazriya Nazim as his cousins. The film received positive reviews and emerged as one of the highest-grossing Malayalam films of all time, grossing around

500 million (US$8.5 million). Later that year, he co-starred with Unni Mukundan in Lal Jose's Vikramadithyan. It was a commercial success. He then performed in what he called his "most challenging film yet" in Renjith's Njaan (2014). His performance received favourable reviews and earned him several accolades, including a second Best Actor nomination at Filmfare.

In 2015, he acted opposite Nithya Menen in two films—Jenuse Mohamed's romantic comedy 100 Days of Love, and Mani Ratnam's Tamil romantic drama O Kadhal Kanmani. The latter opened to positive reviews and became successful at the box office. About Salmaan's performance, The Hindu's critic Baradwaj Rangan wrote: "Dulquer Salmaan checks off all boxes in the Can You Be The Next Madhavan? questionnaire", though he believed the film belonged primarily to Menen. Salmaan next played the titular character in Martin Prakkat's Charlie (2015). The film generated a positive response from critics and received eight Kerala State Film Awards, with Salmaan receiving his first Best Actor Award. He also received a third Best Actor nomination at Filmfare.

He then appeared in Sathyan Anthikad's family drama Jomonte Suvisheshangal (2017). Despite comparisons with 2016 Malayalam drama Jacobinte Swargarajyam, the film did well commercially. His next appearance was in Amal Neerad's action-adventure film Comrade In America (2017). The Hindu called it "Dulquer's big hit of 2017". He then portrayed four roles in the Malayalam-Tamil bilingual anthology Solo (2017) directed by Bejoy Nambiar. The film was critically panned and "faced immense backlash from the audience"

He next featured in the Telugu film Mahanati, a biopic on actress Savitri. His Telugu debut, the film opened to positive reviews from critics and enjoyed commercial success at the box office. Salmaan's portrayal of Gemini Ganeshan was also acclaimed. Later that year, Salmaan made his Hindi film debut with Karwaan. Though the film received "mixed response", Salmaan's performance was appreciated.

In 2019, he starred in Oru Yamandan Premakadha a Malayalam romantic comedy film directed by B. C. Noufal. After Karwaan, Salmaan's next Bollywood movie The Zoya Factor released in September 2019. Abhishek Sharma's film adaptation of Anuja Chauhan's novel The Zoya Factor did not perform well at the box-office but Salmaan's performance was appreciated. The Times of India stated: "From being playful to intense, Dulquer steals the show as he is absolutely brilliant in his portrayal".

In 2020, his production company Wayfarer films was launched. His first released project as a producer and actor was family drama Varane Avashyamund where he co-starred alongside Suresh Gopi, Shobana and Kalyani Priyadarshan. The film hit the screens in 2020 and garnered positive reviews.

Other project of him as a producer is Shamzu Zayba's romantic-comedy Maniyarayile Ashokan which is produced through his production company Wayfarer Films, and starring Jacob Gregory and Anupama Parameswaran. He is slated to star in the upcoming crime-thriller Kurup in which he play the tituar role of Sukumara Kurup, also marks his third production venture.[excessive citations]

On 22 December 2011, he married architect Amal Sufiya in an arranged marriage. Amal comes from a North Indian Muslim family settled in Chennai. The couple has a daughter born in May 2017.

He has also been involved in several social service activities. He has acted in a short film as part of the Kerala motor vehicle department's safe riding campaign. He donated 150 items, including clothing, shoes, books, school supplies and crockery items, as a part of the Chennai Gives initiative. In addition, he used to run a web portal for trading cars, and a dental business chain in Chennai. He also is the director of the Bangalore-based Motherhood Hospital.

Salmaan was ranked 4th by GQ in their listing of the 50 most influential young Indians of 2016. He was also featured by GQ in their listing of the Best Dressed Men India 2016. He was selected as the "Most Desirable Man" in 2013 and 2014 by Kochi Times, subsidiary of The Times Group. In 2019, Salmaan became the first actor from Kerala to get featured on the October edition cover of Vogue India.

All content from Kiddle encyclopedia articles (including the article images and facts) can be freely used under Attribution-ShareAlike license, unless stated otherwise. Cite this article:
Dulquer Salmaan Facts for Kids. Kiddle Encyclopedia.