Dungeons & Dragons is an American animated television series based on TSR's Dungeons & Dragons role-playing game. A co-production of Marvel Productions and TSR, the show originally ran from 1983 through 1985 for three seasons on CBS for a total of twenty-seven episodes. The Japanese company Toei Animation did the animation for the series.

The show focused on a group of six friends who are transported into the titular realm and followed their adventures as they tried to find a way home with the help of their guide the Dungeon Master.

A final unproduced episode would have served as both a conclusion to the story as well as a re-imagining of the show had the series been picked up for a fourth season; however, the show was cancelled before the episode was made. The script has since been published online and was performed as an audio drama as a special feature for the BCI Eclipse DVD edition of the series. In 2020, a fan-made animation of the finale using new and existing animation from the show and audio from the audio drama was uploaded to YouTube.

The show focuses on a group of friends aged between 8 and 15 who are transported to the "realm of Dungeons & Dragons" by taking a magical dark ride on an amusement park roller coaster. Upon arriving in the realm they meet Dungeon Master (named for the referee in the role-playing game) who gives each child a magical item.

The children's main goal is to find a way home, but they often take detours to help people or find that their fates are intertwined with that of others. The group comes across many different enemies, but their primary antagonist is Venger. Venger is a powerful wizard who wishes to rule the realm and believes the power from the children's weapons will help him to do so. Another recurring villain is Tiamat, who is a five-headed dragon and the only creature that Venger fears.

Throughout the show, a connection is suggested between Dungeon Master and Venger. At the end of the episode "The Dragon's Graveyard", Dungeon Master calls Venger "my son." The final unproduced episode "Requiem" would have confirmed that Venger is the Dungeon Master's corrupted son (making Karena Venger's sister and Dungeon Master's daughter), redeemed Venger (giving those trapped in this realm their freedom), and ended on a cliffhanger where the six children could finally return home or deal with evil that still existed in the realm. 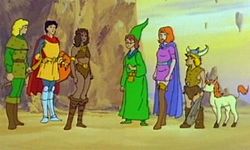 Left to right: Hank, Eric, Diana, Presto, Sheila, Bobby and Uni. in the first episode "The Night of No Tomorrow" 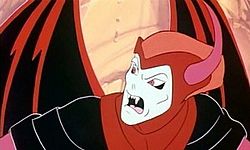 Venger, the main villain; trapped in "The Dragon's Graveyard"

The intended final episode from the third season, and potential series finale, entitled "Requiem", was written by the series' frequent screenwriter Michael Reaves, but was not finished due to the show's cancellation. It would have served as both a conclusion to the current story as well as a re-imagining of the series had the show continued into a fourth season. Reaves has discussed the episode online, and published the original script on his personal website. The BCI Eclipse Region 1 DVD release includes the script recorded in the form of an audio drama as a special feature.

In September 2020 a fan-made animation of "Requiem", completed largely using existing animation from the show and some new animation along with audio from the audio drama, was uploaded to YouTube. The animation also features additional dialogue recorded by fans, and Katie Leigh reprising her role as Sheila.

"Requiem" sees Venger offer the group a chance to finally get home. The offer splits the group into two factions, with Eric wanting to help Venger and return home, while Hank, untrusting of Venger's motives, tries to stop Eric from completing Venger's quest. Both groups however manage to reach the final destination, a tomb containing a key that Venger wants destroyed. Realizing Venger is a prisoner of the realm as much as they are, instead of destroying the key Hank persuades Eric to use it to open a locked magic door in the tomb that transforms Venger back to human form and creates portals allowing others trapped in the realm to escape. Dungeon Master opens a portal back to the amusement park and offers the children the opportunity to stay and continue fighting evil. The original script ends on an open ending; the fan animation sees the group returning home except for Presto, who stays behind to look after Uni, to become a wizard, and to return to his soulmate Varla.