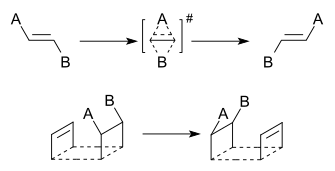 In type I rearrangements (Y-A-B-X conversion to X-A-B-Y), the two migrating groups are oriented trans to each other. The reaction leaves both groups on the opposite sides. The first example of a dyotropic rearrangement involving a carbon-carbon bond was reported by Cyril A. Grob and Saul Winstein. They saw the exchange of two bromine atoms in a certain steroid.

In a simple example, the two bromine atoms in 3-tert-butyl-trans-1,2-dibromohexane mutarotate by heating. In the transition state both bromine atoms connect symmetrically two both carbon atoms on opposite sides and the reaction is concerted. Chemists have also investigated stepwise mechanisms in dyotropic reactions.

In organic synthesis, an important dyotropic reaction is the conversion of 4-substituted-gamma-lactones to butyrolactones. Type I dyotropic rearrangements also occur around carbon-oxygen bonds. One example is using heat to change RRSi1R3C-O-Si2R3 to RRSi2R3C-O-Si1R3. (This reaction can go in both directions depending on temperature.) Another example is the 1,2-Wittig rearrangement. Dyotropic reactions can also happen with N-O bonds or N-N bonds.

All content from Kiddle encyclopedia articles (including the article images and facts) can be freely used under Attribution-ShareAlike license, unless stated otherwise. Cite this article:
Dyotropic reaction Facts for Kids. Kiddle Encyclopedia.