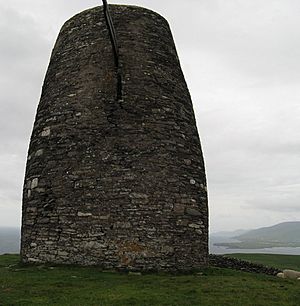 Eask Tower with view of the tip of the Ring of Kerry in foreground.

The Eask Tower is a solid stone tower on the top of Carhoo Hill, in County Kerry, Ireland, over-looking Dingle harbour.

Eask Tower was built in 1847 in order to guide the ships and boats into the mouth of the blind harbour. The wooden hand pointing from the Tower, guides the boats to their destination. It is crowned with the 19th century's mariners beacon and a World War II look-out post. This is because the mouth of Dingle Harbour is a "blind" mouth, and this beacon told sailors to let their sails down, enabling them to lose speed and to round the harbour mouth safely.

The Tower is of solid stone. The building of it on Carhoo (Ceathru) hill, 600 feet above sea level, provided work during the Great Famine, at the instigation of Reverend Charles Gayer, Leader of the Protestants, in an attempt to win converts. Twenty-seven feet was its original height, but at the turn of the century, the old hand was removed and an extra thirteen feet of stone was added to its height. A new hand was placed, roughly at the beginning of the extension.

The panoramic views seen from Carhoo Hill include a large proportion of the Dingle Peninsula and beyond. For example, The Blasket Islands, Slea Head, Ventry, Dingle Harbour, the Iveragh Peninsula, Skellig Rocks, and Irelands two highest mountains - Carrauntoohil and Mount Brandon.

All content from Kiddle encyclopedia articles (including the article images and facts) can be freely used under Attribution-ShareAlike license, unless stated otherwise. Cite this article:
Eask Tower Facts for Kids. Kiddle Encyclopedia.