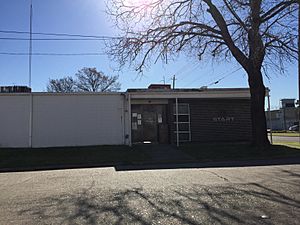 START Houston houses the offices of the management district

East Downtown Houston (EaDo) is a district in Houston, Texas, United States. The East Downtown Management District (EDMD), manages the area with offices headquartered at START Houston, a co-working space 1121 Delano Street. The community is located east of Downtown Houston and north of Interstate 45 (Gulf Freeway). It is between the George R. Brown Convention Center and the East End district.

The Old Chinatown, an area within East Downtown bounded by Interstate 69/U.S. Route 59, Preston Street, St. Joseph Parkway, and Dowling Street, is the older of the two Houston Chinatowns. The East Downtown Chinatown is not the same as the Chinatown in southwestern Houston. 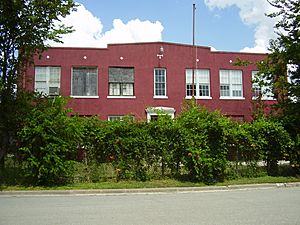 In the 1930s many Cantonese immigrants moved to the former Houston Chinatown, then a part of the Third Ward area, from Downtown Houston in an effort to find more inexpensive land. The Cantonese opened several businesses, including grocery stores and restaurants, and held Chinese New Year celebrations. Immigrants from other East Asian countries, including Vietnam, moved into the Chinatown.

In the early 1950s the Chinese Merchants' Association moved to the southeastern edge of Downtown Houston. Many Chinese businesses moved there. The Chinatown solidified as many Asian immigrants, including Viet Hoa, began moving to Houston in the 1970s. By the 1980s a theater, supermarkets, warehouses, a bank, and restaurants were located there. 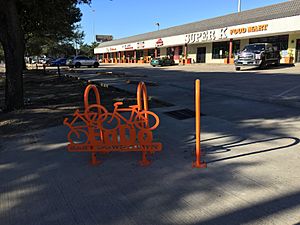 By the late 1980s increasing numbers of Chinese began living in suburbs in Southwest Houston and Fort Bend County. In addition, the Chinatown was geographically hemmed in, with surrounding low income African-American and Hispanic neighborhoods and the Downtown area preventing additional growth. Two Chinese religious temples opened about 1 mile (1.6 km) south of the old Chinatown in the 1990s.

By the 1990s, many of the East Asian businesses left and had relocated to the current Chinatown in southwest Houston.

In a November 28, 2002 Houston Press article John Nova Lomax described what is now known as East Downtown Houston as "a silent, godforsaken stretch of no-man's-land that's not really the Warehouse District, nor the Third Ward, nor the East End." Lomax said that he used "that bulky definition" since that by 2000, the name "Chinatown," still used in the 1980s and 1990s, "was no longer apt." The area received its current name in the late 2000s.

In 2008 the management district and its namethedistrict.com website asked for suggestions for a new name for the district. Suggestions included "the Warehouse District," referring to the abandoned warehouses, and "Saint E," after St. Emanuel Street, a key street and the location of several bars and clubs. The district selected "EaDo," short for "East Downtown," one of the three most popular suggestions for the name of the district.

During the same year Dan Nip, a developer and East Downtown Management District board member, encouraged people to invest in the Old Chinatown area in East Downtown; if a person invests $500,000 United States dollars in the Old Chinatown and subsequently creates two jobs for ten years, he or she would become eligible for a EB-5 visa. By late 2009 the East Downtown authority began re-branding the district to reflect its current name. By 2010 a community of artists began to form in EaDo. 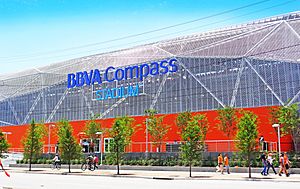 BBVA Compass Stadium is home for the Houston Dynamo and the Texas Southern University football team, which is on a tract of land bordered by Texas, Walker, Dowling and Hutchins in East Downtown. BBVA Compass is the first soccer-specific stadium in MLS to be located in a Downtown area. The stadium seats 22,039 and besides hosting soccer and football events will hold other events such as concerts and boxing matches.

Helen Anders of the Austin American-Statesman said that EaDo "looks like an art installation, with the steamshiplike George R. Brown Convention Center as a backdrop, skyscrapers lurking in the background and angular new condos set against low-slung warehouses, some of them still in use for industrial storage."

Historically many of the Hispanic residents lived in small houses. The opening of the BBVA Compass Park and Minute Maid Park encouraged development of EaDo, and by 2015 many of the older houses were being replaced by townhouses with wealthier occupants. 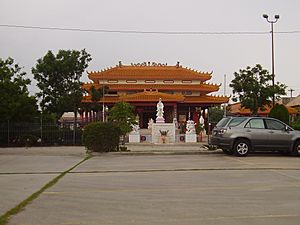 The Texas Guandi Temple (Chinese: 德州关帝庙; pinyin: Dézhōu Guāndì Miào) is located in East Downtown. The temple was established in 1999 by a Vietnamese couple, Charles Loi Ngo and Carolyn. They decided to build a temple to Guan Yu (Guandi) after surviving an aggravated robbery, which occurred at their store in the Fifth Ward. They believed that Guandi saved their lives during the incident. A Vietnamese refugee named Charles Lee coordinated the donations and funding so the temple could be built; Lee stated his motivation was to thank the United States for welcoming him and saving his life when he arrived in 1978. The temple is open to followers of all religions, and it has perfumed halls.

The district has long been known for a relatively large homeless population (comparable to Skid Row, Los Angeles but on a far smaller scale). Many of the homeless in the Houston area congregate in East Downtown because of the presence of nearby agencies that provide services (which predate the current redevelopment efforts) and several groups that independently provide food, clothing, toiletries and other items on nearby vacant lots. Nearly all Houston non-profit and faith-based agencies which provide services to the homeless, including food and shelter, are located within Downtown and Midtown. A major shelter for women and children operated by Star of Hope, a faith-based agency, is located on Dowling Street, between Texas & Franklin; the agency operates a men's facility nearby on the west side of US 59, north of Minute Maid Park.

There has been some tension in recent years between developers who want to revitalize the East Downtown district with commercial and residential projects, and the homeless (and homeless service providers). Some have called for the city of Houston to restrict public sleeping on sidewalks and to regulate charitable serving of food. It remains to be seen whether or not current services to the homeless can continue in East Downtown in the face of ongoing revitalization and redevelopment efforts.

Since 2015, METRORail light rail has served the neighborhood at EaDo/Stadium station via the Green and Purple lines, and the Leeland/Third Ward station via the Purple Line. In addition to light rail, Metropolitan Transit Authority of Harris County (METRO) operates bus service through the area.

All content from Kiddle encyclopedia articles (including the article images and facts) can be freely used under Attribution-ShareAlike license, unless stated otherwise. Cite this article:
East Downtown Houston Facts for Kids. Kiddle Encyclopedia.