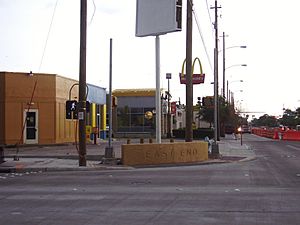 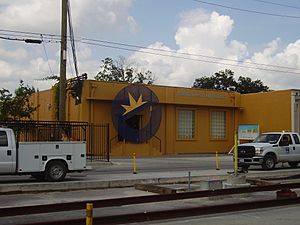 The East End, controlled by the Greater East End Management District (GEEMD), is a district in eastern Houston, Texas, United States, located between the eastern edge of downtown to the Port of Houston and South to Hobby Airport. The district is home to Houston's early history and industry and is the site of Harrisburg, the seat of government for the Republic of Texas in 1836. East End consists of many different ethnic groups, including Hispanic, Asian, White, and African American. Latinos make up more than half of the 100,512 residents, The area includes two of Houston's oldest Hispanic neighborhoods, Magnolia Park and Second Ward. 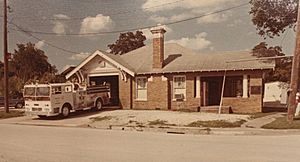 The East End is bounded on the west by downtown Houston and on the east by the Port of Houston. Buffalo Bayou flows past the site of Harrisburg, an early Texas trading post and seat of government for the Republic of Texas in 1836. Founded by John Harris, for whom Harris County is named, Harrisburg was initially considered by the Allen brothers for the initial development of Houston.

The East End was a primary area for relocation for Germans, Italians and Mexican Americans that settled in areas near the port of Houston. Second Ward and Magnolia Park, located in the district, are two of Houston's oldest Hispanic neighborhoods.

The Eastwood subdivision, established in 1913, is considered one of the first master-planned communities in Houston. Many well-known Houstonians including Howard Hughes lived in Eastwood as children.

The district has become popular among those who restore many of its vintage homes. In the mid-to-late 2000s upper middle class residents moved into the East End to take advantage of houses that are less expensive than west side houses. Other neighborhoods include: Lawndale/Wayside, EaDo (East Downtown Houston), Broadmoor, Idylwood, Houston Country Club Estates, Forest Hill, Mason Park and Pecan Park. For several months leading into August 2007, the East End Chamber of Commerce Crime Awareness Committee argued that the Houston Police Department assigned insufficient police officers in the area.

In 1997, Lori Rodriguez of the Houston Chronicle said "In the lifetime of some coalition members, the East End has gone from being mainly white to mainly Hispanic, mainly affluent to mainly modest, mainly thriving to mainly struggling," and that "a younger and more aggressive leadership is trying to revitalize the area and, to a touchingly discernible degree, it has succeeded."

The Talento Bilingue de Houston, the largest cultural arts center of its kind in Houston is located in the East End, as well as the 100 seat Carlos Garcia Theater at Houston Community College-Southeast campus which was dedicated in late 1997. The district is home to The Orange Show, Our Lady of Guadalupe Church, Mutalistan Hall, and a Chicano mural by artist Leo Tanguma on Canal Street.

The Association for the Advancement of Mexican Americans opened the new $3.6 million AAMA Multi-Purpose Education Center in 1999. The center includes computer and science labs. The Ripley House-Neighborhood Centers successfully completed a capital campaign to raise $9 million to replace its 60-year-old, aging physical structure with a new 60,000-square-foot (5,600 m2) community center. 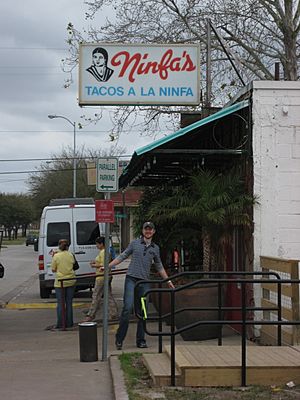 In 2013 Houstonia wrote that the East End is "home to some of the city’s best Mexican restaurants and bakeries." The original Ninfa's restaurant opened in the East End in 1973. The Ninfa's chain became very popular and prominent. In 1997 Paul Galvani of the Houston Press said that despite the fact that the East End has "standouts " like Ninfa's, Mandola's Deli, and Shanghai Reds, "it too frequently gets bypassed when folks think about eating out." In 1997 the East End Management Association published a dining guide listing 42 restaurants within the East End, including in the Second Ward, the original Chinatown, Magnolia Park, and other communities. The Houston Convention and Visitors Bureau and various area hotels and restaurants distributed the guides for free, and the East End Area Chamber of Commerce mailed copies of the guide, with each copy priced for $2.50 ($3.32 when adjusted for inflation).

In 2011 Dane Schiller of the Houston Chronicle said "Parts of the area have the feel of Mexico: brightly painted homes and narrow streets, store signs in Spanish and snow cones sold from carts." In 1997 Lori Rodriguez of the Houston Chronicle said that "the revitalization" that occurred in the 1990s "seems to abruptly stop at the railroad tracks that crisscross Harrisburg beyond the Plaza" and that "the slick national chains must share the commercial corridor with cantinas, empty buildings and halfway houses."

As of 2013 24% of the land in the Greater East End was used for warehouses and industrial purposes.

By 2015 new townhouse developments were appearing in the East End.

On the METRORail Green Line:

All content from Kiddle encyclopedia articles (including the article images and facts) can be freely used under Attribution-ShareAlike license, unless stated otherwise. Cite this article:
East End, Houston Facts for Kids. Kiddle Encyclopedia.