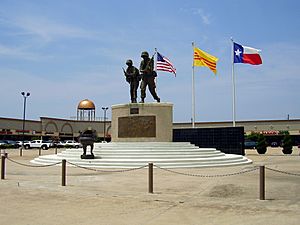 Chinatown (Simplified Chinese: 中国城, Hanyu Pinyin: Zhōngguóchéng) is a community in southwestern Houston, Texas, United States. It is roughly bounded by Fondren Road, Beechnut Street, State Highway 6, and Westpark Drive, and lies between Alief and the city of Bellaire. The naming of the new Chinatown is disputed, as various ethnic groups, especially Vietnamese, live within the community. Portions of Chinatown lie within the Southwest (formerly Greater Sharpstown), International, and Westchase management districts.

There is another Chinatown called "Old Chinatown" located within the East Downtown Houston district near the George R. Brown Convention Center.

The first businesses of the new Houston Chinatown opened in 1983. In the 1980s increasing numbers of Chinese were living in Southwest Houston and Fort Bend County and those residents were further away from the old Chinatown in what is now East Downtown. The new Chinatown began to expand in the 1990s when Houston-area Asian American entrepreneurs moved their businesses from older neighborhoods, especially the "Old Chinatown" on the eastern end of Downtown Houston (in the process of redevelopment), in a search for more inexpensive properties and lower crime rates (at the time).

In 2005 Christy Chang, a tour operator who operated tours into Chinatown, said "This area is not just Chinatown anymore. If anything, it's Asia Town" due to the presence of various ethnic groups that developed in the community. The Asian American Business Council estimated that between 2004 and 2008 the land values along Bellaire Boulevard in Chinatown increased between 25 and 50 percent. In 2008 the group estimated that 2,000,000 square feet (190,000 m2) in construction would appear in the following two-year period. The group estimated that the construction would include high end condominiums. Lisa Gray of the Houston Chronicle stated that the development of the remaining acreage would likely cause rents to increase and that, compared to many other Chinatowns in the United States, the Houston Chinatown is still relatively inexpensive. 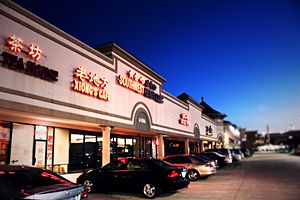 A retail center in Chinatown in southwest Houston, where restaurants serving authentic Chinese food are located.

The Bellaire Chinatown is about 12 miles (19 km) southwest of Downtown Houston. It is over 6 square miles (16 km2), making it among the largest automobile-centric Chinatowns in the United States. The Chinatown, located on a mostly treeless plain, is, according to Lori Rodriguez of the Houston Chronicle, roughly bounded by Fondren, Beechnut, State Highway 6, and Westpark, west of Bellaire. The half of the Rodriguez definition of Chinatown inside Beltway 8 is within the Greater Sharpstown district. The Greater Sharpstown Management District defines Chinatown within its borders as being a 2.37-square-mile (6.1 km2) area bounded roughly by Beltway 8, the Westpark Tollway, Beechnut, and Redding. Much of western Chinatown under the Rodriguez definition lies within the International Management District. A portion of the Rodriguez definition of Chinatown lies within the Westchase district. The community is between Westchase and the City of Sugar Land. Katharine Shilcutt of the Houston Press said that Chinatown was "straddling Beltway 8 on the southwest side like an entire city unto itself."

The new Chinatown is located within a residential area of single-family houses and apartments, and its spread-out nature differs from the East Downtown Chinatown, which was in a relatively compact area. The businesses within the new Chinatown include a mall, supermarkets, shopping centers, restaurants, and bakeries. The street signs have Chinese characters. 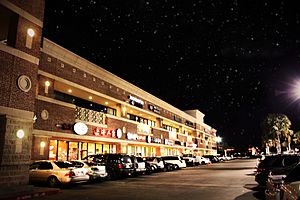 A retail center in Chinatown

The Bellaire Chinatown has many "retail condos," shopping centers in which spaces are owned instead of leased. Many East Asian people prefer to own shopping places instead of renting them. In the United States "retail condos" are rare outside of areas populated by East Asian Americans. The community has restaurants serving many kinds of cuisines, including Chinese, Hong Kong and Taiwanese, Filipinos, Indonesian, Japanese, Korean, Laotian, Malaysian, and Thai. In addition it has restaurants operated by ethnic Vietnamese that serve Louisiana-style crawfish. The community also has many fusion cuisine restaurants. Shilcutt said that "the restaurant density in this area is roughly equivalent to the population density of Vatican City."

Lisa Gray of the Houston Chronicle stated that this Chinatown resembles newer Chinatowns that opened in automobile-oriented metropolitan areas in the United States such as suburbs in Greater Los Angeles and the Silicon Valley, as opposed to older, uniformly Chinese, pedestrian-oriented Chinatowns in New York City and San Francisco. Gray said that in older Chinatowns immigrant businesses cluster together by ethnic group, while in newer automobile oriented Chinatowns retail operations from different ethnic groups move in next door to each other. 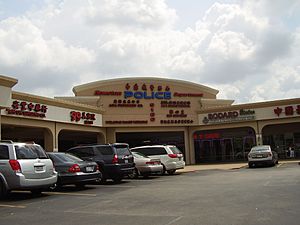 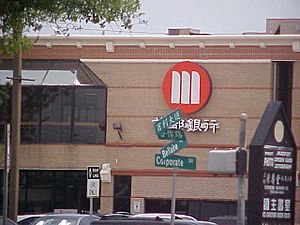 Chinese holidays are celebrated in this Chinatown.

The Chinese Community Center (CCC, Chinese: 休士顿中华文化服务中心, Hanyu Pinyin Xiūshìdùn Zhōnghuá Wénhuà Fúwù Zhōngxīn, "Houston Chinese Culture Service Center"), an IRS 501(c)(3) organization and a United Way affiliate, is located at 9800 Town Park Drive. The facility opened in 1979 as the Chinese Language School. The CCC has several levels of English classes offered daily. As of 2006, at CCC about 80% of the students have university degrees, and the other 20% are the companions of the students with university degrees.

All content from Kiddle encyclopedia articles (including the article images and facts) can be freely used under Attribution-ShareAlike license, unless stated otherwise. Cite this article:
Chinatown, Houston Facts for Kids. Kiddle Encyclopedia.