East Norwalk is a neighborhood of Norwalk, Connecticut, located mostly in Norwalk's third taxing district with segments of its northernmost area within the first and fifth taxing districts. As one of the earliest settlements of Norwalk, it was so marked with a block of 'suitably inscribed' 'native granite' formally located on the corner of Fitch Street and East Avenue.

East Norwalk is the location of Norwalk's original colonial settlements. The land was purchased from the Norwalke Indians by Roger Ludlow in 1640. Historical markers in the neighborhood include the Founding Monument on East Ave and the First Settlers Monument inside the East Norwalk Historical Cemetery.

British forces under General William Tryon arrived on July 10, 1779 at Fitch's Point and destroyed most of Norwalk by fire; only six houses were spared. A portion of the Thomas Fitch (governor) house was left standing and in the 1950s it was moved to the Mill Hill Historic Park to make way for the construction of the Connecticut turnpike (I-95).

Norwalk's neighborhoods do not have official status, and as such are boundary deficient. Nonetheless, East Norwalk's location within the city of Norwalk can be roughly described as being south of Interstate 95, east of the Norwalk River, north of a line from the Norwalk River along 5th Street to Gregory Boulevard, west of a line along Gregory Boulevard to Emerson Street then along Stanley Street then along Strawberry Hill Avenue back to Interstate 95.

One prominent local institution in the neighborhood is Overton's, a 60-year-old "landmark food stand" that closes down in the colder months. The owner also owns the neighboring Harbor Lights waterfront restaurant and the East Side cafe. The food stand was founded by Willis Overton in 1948 and sold to the Gavrielidis family in 2000 because the Gavrielidises were the only potential buyers who promised not to tear it down, according to Willis' son, Neil. 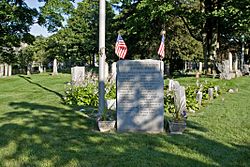 The First Settlers Monument in the East Norwalk Historical Cemetery

The burial location of some the first settlers of Norwalk including Governor Thomas Fitch, IV, and Thomas Fitch, V, the inspiration for the song "Yankee Doodle".

"Veteran's Memorial Park and Marina" is situated on 35 acres, and includes a marina and boat launch site, a playground, bicycle and jogging paths, basketball courts, soccer, hockey, and football fields, baseball diamonds, visitor docks with full power available, a boating center and marina. The park also includes a walk esplanade overlooking scenic Norwalk Harbor." It is also the site of the assembly of the annual Memorial Day parade.

The land, formally named Duffy's Field, was also once a dumpsite that was never environmentally tested. Dumping continued until the 1960s. Veterans Park was built before the state Department of Environmental Protection had a permitting process for old dumpsites.

The city of Norwalk Fire Department operates 1 Fire Station in East Norwalk: Fire Station # 3 is located at 56 Van Zant St. Fire Station # 3 was the home of the Mayflower Volunteer Hook & Ladder Co. 1, one of the city's original volunteer fire companies.

All content from Kiddle encyclopedia articles (including the article images and facts) can be freely used under Attribution-ShareAlike license, unless stated otherwise. Cite this article:
East Norwalk Facts for Kids. Kiddle Encyclopedia.