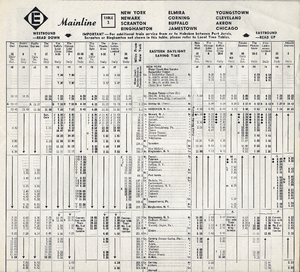 The station had served several Delaware, Lackawanna and Western Railroad and then Erie-Lackwanna passenger trains. Aside from the Lake Cities, these included the Owl/New York Mail, Twilight/Pocono Express and the DLW flagship train, the Phoebe Snow.

The Stroudsburg area is served by Interstate 80, which links the Pocono Mountains to Northern New Jersey and New York City. High traffic volumes on the highway routinely cause congestion beginning at the Delaware Water Gap (just east of the Stroudsburg area) and extending across New Jersey towards New York City. The former DL&W "cutoff" mainline roughly parallels I-80 across New Jersey, and could potentially alleviate congestion on the highway.

In early July, 2010 local developer Troy Nauman entered a contract to purchase the East Stroudsburg station and announced plans to demolish the historic station and replace it with a new three story apartment building. The impending loss of the station caught the community by surprise and several preservation movements were started by residents, several of which coalesced under the Save the Dansbury Depot Citizens Group. The group lobbied elected officials for a "cooling off" period and attempted to negotiate a waiting period with the station's new owner, who had announced plans to redevelop the site. Its Facebook page attracted over 3,600 members who were urged to attend local public meetings and donate funds to save the building.

Preservation efforts included pledges of $500,000 from Dr. Joseph Mattioli, who owned Pocono Raceway in Long Pond, Pennsylvania. Although a judge delayed the demolition with an injunction on July 24, 2010, it was reversed by another judge only four days later and demolition had begun, despite outcry. 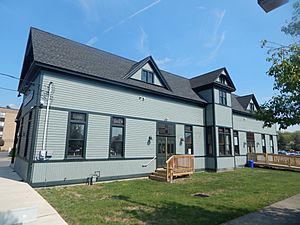 East Stroudsburg station in May 2015, post-restoration

In response to public outcry, a plan for rehabilitation and reuse of the oldest part of the original station was implemented by The Eastburg Community Alliance. In spite of the start of demolition, no significant part of the original station was lost. The station itself was moved temporarily to a public parking lot on the eastern side of the Pennsylvania Northeast Regional Rail Authority RR track, to await a concrete pad on which to be set permanently.

As of the Summer of 2011, the station has been set on a new permanent foundation across the tracks from its original site. Renovation work was underway to return the station to its earlier appearance with the Lackawanna railroad. The side of the station facing the tracks is the face that had originally faced the tracks; the station was spun 180 degrees during its move.

The station is just a stone's throw from the Lackawanna Tower, also being preserved by a local group.

Even though the DL&W railroad has long been out of business, one track from Stroudsburg west to Scranton and beyond is still in use. The Delaware–Lackawanna Railroad runs a short-line freight service on the line. Scranton is also the home of Steamtown National Historic Site. Tourist excursions from Scranton (less than 50 highway miles away) to Stroudsburg also use the remaining track. Crossing signals have been upgraded to meet current standards.

New Jersey Transit, the commuter railroad primarily feeding the New York City and Philadelphia areas, has purchased the former DL&W right-of-way, and has begun re-laying track at the eastern end of the cutoff, with the intent of relaying track westward across New Jersey to re-connect the DL&W rails through to Stroudsburg.

As part of that rebuilding NJ plans to include a station stop in East Stroudsburg. The plan is for a station just south of the former station site, located between the track and Crystal Street. It is proposed to have with 228 parking spaces and one side level platform. The station is about 80 miles (130 km) from New York City and would become part of the new Lackawanna Cut-Off line.

All content from Kiddle encyclopedia articles (including the article images and facts) can be freely used under Attribution-ShareAlike license, unless stated otherwise. Cite this article:
East Stroudsburg station Facts for Kids. Kiddle Encyclopedia.