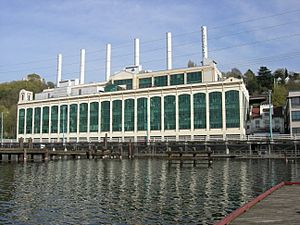 The former City Light Plant No. 3, once ZymoGenetics, now part of the Fred Hutchinson Cancer Research Center, in Eastlake along Lake Union

Eastlake is a neighborhood in Seattle, Washington, so named because of its location on the eastern shore of Lake Union. Its main thoroughfare is Eastlake Avenue E., which runs from Howell Street at the northeast corner of Downtown north over the University Bridge to the University District, where it connects to Roosevelt Way N.E. and 11th Avenue N.E. A second thoroughfare is Boylston Avenue E.; as an arterial, it parallels Interstate 5 for the four blocks between E. Newton Street to the south and E. Roanoke Street to the north, acting as an extension of Capitol Hill's Lakeview Boulevard E.

All content from Kiddle encyclopedia articles (including the article images and facts) can be freely used under Attribution-ShareAlike license, unless stated otherwise. Cite this article:
Eastlake, Seattle Facts for Kids. Kiddle Encyclopedia.