Echinopsis pachanoi (syn. Trichocereus pachanoi) — known as San Pedro cactus — is a fast-growing columnar cactus native to the Andes Mountains at 2,000–3,000 m (6,600–9,800 ft) in altitude. It is found in Argentina, Bolivia, Colombia, Chile, Ecuador and Peru, and it is cultivated in other parts of the world. Uses for it include traditional medicine and traditional veterinary medicine, and it is widely grown as an ornamental cactus. It has been used for healing and religious divination in the Andes Mountains region for over 3,000 years. It is sometimes confused with its close relative Echinopsis peruviana (Peruvian torch cactus).

Echinopsis pachanoi is known by many names throughout South America such as achuma, huachuma, wachuma, aguacolla, hahuacollay, or giganton.

Echinopsis pachanoi is native to Ecuador and Peru. Its stems are light to dark green, sometimes glaucous, with a diameter of 6–15 cm (2.4–5.9 in) and usually 6–8 ribs. The whitish areoles may produce up to seven yellow to brown spines, each up to 2 cm (0.8 in) long although typically shorter in cultivated varieties, sometimes being mostly spineless. The areoles are spaced evenly along the ribs, approximately 2 cm (0.8 in) apart. Echinopsis pachanoi is normally 3–6 m (10–20 ft) tall and has multiple branches, usually extending from the base but will emerge around broken branches. The tallest recorded specimen was 12.2 metres (40 ft) tall. White flowers are produced at the end of the stems; they open at night and last for about two days. Large numbers can be produced by well established cacti and may open new flowers over a period of weeks. The flowers are large, around 19–24 cm (7.5–9.4 in) long with a diameter of up to 20 cm (7.9 in) and are highly fragrant. There are black hairs along the length of the thick base leading to the flower. Oblong dark green fruits are produced after fertilization, about 3 cm (1.2 in) across and 5–6 cm (2.0–2.4 in) long. 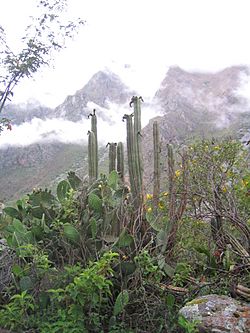 Echinopsis pachanoi, San Pedro Cactus, the tall cactus in the mid-foreground, in its natural habitat in Peru. Several fruits with shrivelled flowers can be seen.

Echinopsis pachanoi has a long history of being used in Andean traditional medicine. Archeological studies have found evidence of use going back two thousand years, to Moche culture. Although Roman Catholic church authorities after the Spanish conquest attempted to suppress its use, this failed, as shown by the Christian element in the common name "San Pedro cactus" – Saint Peter cactus. The name is attributed to the belief that just as St Peter holds the keys to heaven, the effects of the cactus allow users "to reach heaven while still on earth." 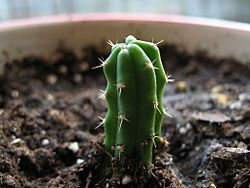 The San Pedro cactus grows in USDA hardiness zones 8b to 10. The range of minimum temperatures in which San Pedro is known to grow is between -9.4 °C and 10 °C.

The San Pedro cactus is very easy to grow in most areas and grows best in a temperate climate. Because it grows naturally in the Peruvian Andes Mountains at high altitude and with high rainfall, it can withstand temperatures far below that of many other cacti. It requires fertile, free-draining soil. They average half a meter per year of new growth. They are susceptible to fungal diseases if over-watered, but are not nearly as sensitive as many other cacti, especially in warm weather. They can be sunburned and display a yellowing chlorotic reaction to overexposure to sunlight.

In winter, plants will etiolate, or become thin, due to lower levels of light. This may be problematic if the etiolated zone is not sufficiently strong to support future growth as the cactus may break in strong winds.

Like many other plants, Echinopsis pachanoi can be propagated from cuttings. The result is a genetic clone of the parent plant. A long cactus column can be also laid on its side on the ground (like a log), and eventually roots will sprout from it and grow into the ground. After time, sprouts will form and cactus columns will grow upward out of it along its length.

Like a lot of its relatives Trichocereus pachanoi as a species is easily grown from seed, often by means of a so-called "Takeaway Tek". This term refers to the practice of the sowing of Trichocereus (and sometimes other types of cactus) seed into plastic containers such as those many food takeaways are delivered in. This creates a semi-controlled humidity environment chamber for 6 months to a year, in which the seed may germinate and then grow relatively unbothered by environmental contamination.

In most countries it is legal to cultivate the San Pedro cactus. In countries where possession of mescaline and related compounds is illegal and highly penalized, cultivation for the purposes of consumption is most likely illegal and also highly penalized. This is the case in the United States, Australia, Canada, Sweden, Germany, and New Zealand, where it is currently legal to cultivate the San Pedro cactus for gardening and ornamental purposes, but not for consumption.

All content from Kiddle encyclopedia articles (including the article images and facts) can be freely used under Attribution-ShareAlike license, unless stated otherwise. Cite this article:
Echinopsis pachanoi Facts for Kids. Kiddle Encyclopedia.