Economy of Colorado facts for kids

The economy of the US state of Colorado according to The Bureau of Economic Analysis gross state product estimates for 2008 was $248.6 billion. The Colorado economy ranked 20th largest in the United States in 2008. Per capita personal income in 2003 was $34,561, putting Colorado 8th in the nation.

In the second half of the 20th century, the industrial and service sectors have expanded greatly. The state's economy is diversified and is notable for its concentration of scientific research and high-technology industries. Other industries include food processing, transportation equipment, machinery, chemical products, minerals such as gold and molybdenum, and tourism. Denver is an important financial center.

The booming state capital Denver is the economic center of Colorado.

As of August 2013, Colorado had 53,800 nonmilitary federal employees, which made of 2.3 percent of the state’s total nonfarm employment, slightly above the national average of 2.0 percent. In addition, there were 37,285 active military in Colorado.

Before Colorado was a state, it was a federal prison territory. Today, the Federal Bureau of Prisons operates the Federal Correctional Complex, in Fremont County, which consists of several separate Federal prisons, including ADX Florence, the only supermax facility in the federal system, home to many convicted terrorists and other notorious criminals.

The North American Aerospace Defense Command (NORAD) and United States Air Force Academy are based in Colorado Springs; National Oceanic and Atmospheric Administration (NOAA), National Center for Atmospheric Research (NCAR) and the National Institute of Standards and Technology in Boulder; United States Geological Survey and other government agencies at the Denver Federal Center in Lakewood; the Denver Mint and United States Court of Appeals for the Tenth Circuit in Denver.

There is also a significant amount of federal lands in the state, including 11 National Forests and four National Parks. There are also numerous private companies that have operations in Colorado that deal with the governmental agencies in the state.

Denver's economy (Denver is the Rocky Mountain region's most populous city), is based largely on its geographic position. The Denver metropolitan area is the largest in the area (the nearest metro area of comparable size is the Kansas City Metropolitan Area about 600 miles east). Denver is the location of federal, high-tech, educational, commercial, financial, cultural, tourist, storage, and distribution services to the Rocky Mountain States. The city is also home to several large corporations in the central United States. 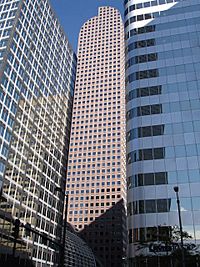 Many federal agencies are based or have offices in the Denver area. In addition to federal agencies, there are many companies based on federal defense and space projects. Lockheed-Martin and Ball Aerospace & Technologies Corp. are examples. Being the capital of the state of Colorado also gives many state jobs to Denver.

Denver's position as the largest city in a mineral-rich and fossil fuel-rich area leads mining and energy companies to maintain offices in the metro area. In the early days of the city, gold and silver booms and busts played a large role in the economic success of the city. In the 1970s and early 1980s, the energy crisis in America created an energy boom in Denver captured in the soap opera Dynasty. Downtown Denver was built up considerably during this time; many new downtown skyscrapers were built. Eventually the oil prices dropped from $34 a barrel in 1981 to $9 a barrel in 1986, and the Denver economy dropped with it, leaving almost 15,000 oil industry workers in the area unemployed (including mayor John Hickenlooper, a former geologist), and the highest office vacancy rate in the nation (30%). Energy and mining are still important in Denver's economy today, with companies such as Newmont Mining, Patina Oil and Gas, and Western Gas Resources.

Denver's west-central geographic location in the Mountain Time Zone (UTC −7) also benefits the telecommunications industry by allowing communication with both North American coasts, South America, Europe, and Asia in the same business day. Denver's location on the 105th meridian west at over 1 mile in elevation also enables it to be the largest city in the U.S. to offer a 'one-bounce' real-time satellite uplink to six continents in the same business day. Qwest Communications, EchoStar, Starz-Encore, and Comcast are just a few of the telecommunications companies with operations in the Denver area. These and other high-tech companies had a boom in Denver in the mid to late 1990s, but the technology bust in the new millennium caused Denver to lose many of those technology jobs. Recently the Denver area has started making a comeback, with the October 2005 unemployment at 4.7% the lowest since September 2001. Denver government and industry leaders are attempting to diversify the Denver economy so that it is less susceptible to boom and bust cycles.

All content from Kiddle encyclopedia articles (including the article images and facts) can be freely used under Attribution-ShareAlike license, unless stated otherwise. Cite this article:
Economy of Colorado Facts for Kids. Kiddle Encyclopedia.