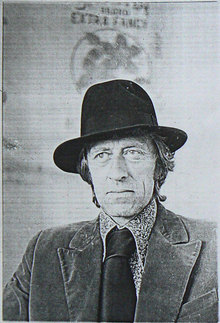 Edward Merton Dorn (April 2, 1929 – December 10, 1999) was an American poet and teacher often associated with the Black Mountain poets. His most famous work is Gunslinger.

Dorn was born in Villa Grove, Illinois. He grew up in rural poverty during the Great Depression. He attended a one-room schoolhouse for his first eight grades. He later studied at the University of Illinois and at Black Mountain College (1950–55). At Black Mountain he came into contact with Charles Olson, who greatly influenced his literary worldview and his sense of himself as poet.

Dorn's final examiner at Black Mountain was Robert Creeley, with whom, along with the poet Robert Duncan, Dorn became included as one of a trio of younger poets later associated with Black Mountain and with Charles Olson.

In 1951, Dorn left Black Mountain and traveled to the Pacific Northwest, where he did manual labor and met his first wife, Helene; they returned to the school in late 1954. After graduation and two years of travel, Dorn's family settled in Washington state, the setting for his autobiographical novel By the Sound (originally published as Rites of Passage), which describes the grinding poverty of life in "the basement stratum of society." In 1961 he accepted his first teaching job at Idaho State University, where he published the magazine Wild Dog. His first book of poetry, The Newly Fallen, was published by LeRoi Jones's Totem Press in 1961.

In 1965, with the photographer Leroy Lucas, Dorn spent the summer visiting Indian reservations for a book commissioned by William Morrow & Co. Press, The Shoshoneans. That fall, British poet and scholar Donald Davie invited him to join the faculty at the Literature Department he was creating at the new University of Essex. He spent most of the next five years in England, where he published several collections of poems and wrote Book 1 of Gunslinger. He also started working with Gordon Brotherston on translations from Latin American texts, solidified his close friendship with British poet J.H. Prynne, and met his second wife, Jennifer Dunbar.

On returning to the United States, Dorn spent the 1970s as an academic migrant, teaching at over half a dozen universities across the country. In San Francisco, he collaborated with the printer and artist team of (Holbrook) Teter and (Michael) Myers on a number of projects, including the Bean News, the comic book format of Recollections of Gran Apachería', and the typesetting of the complete Gunslinger in 1974. In 1977 Dorn accepted a professorship at the University of Colorado at Boulder, where he taught for the rest of his life, directing the Creative Writing Program and editing the literary newspaper Rolling Stock (motto: “If It Moves Print It”) with his wife Jennifer.

During the 1990s, after a teaching exchange visit to Paul Valery University in Montpellier inspired an interest in the Cathars of Southern France, he started working on Languedoc Variorum: A Defense of Heresy and Heretics. He was also writing another long narrative poem Westward Haut. During the last two and a half years of his life, he wrote the poems for the posthumously published Chemo Sabe, reporting on his cancer treatments.

Popular horror novelist Stephen King admired Dorn, describing his poetry as "talismans of perfect writing" and even naming the first novel of The Dark Tower series, "The Gunslinger," in honor of Dorn's poem. King opened both the prologue and epilogue of "The Stand" with Dorn's line, "We need help, the Poet reckoned."

Dorn died of pancreatic cancer on December 10, 1999 in Denver, Colorado. His papers are collected at the University of Connecticut as well as at Indiana University at Bloomington.

In the early 1970s, as a visiting poet at Kent State University, Dorn, along with British poet and editor Eric Mottram, was a mentor and supporter of the musical group Devo, and its founders Gerald Casale and Bob Lewis.

All content from Kiddle encyclopedia articles (including the article images and facts) can be freely used under Attribution-ShareAlike license, unless stated otherwise. Cite this article:
Ed Dorn Facts for Kids. Kiddle Encyclopedia.