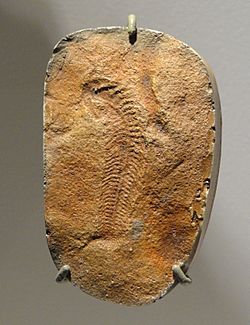 Fossil Spriggina; one of the many fossils found at the Ediacara Hills

Ediacara Hills are a range of low hills in the northern part of the Flinders Ranges of South Australia, around 650 kilometres (400 mi) north of the state capital of Adelaide. The area has many old copper and silver mines from mining activity during the late 19th century. The hills also contain fossils of early multicellular life forms, the Ediacaran biota (lagerstätte), and have given their name to the Ediacaran geological period.

There are other places on earth that have Ediacaran-era fossils including localities in Newfoundland alongside the Atlantic Ocean.

There is a settlement named Ediacara in the Ediacara Hills region, but it is small. Due to the placement of the hills with respect to the Goyder Line, there is not much surface water and limited ground water.

The name "Ediacara" has a disputed origin from one of the Aboriginal languages near the Flinders Range area. It is first known to have been used during the middle of the 19th century. Earlier Australian sources suggested that the "name ‘Ediacara’ or ‘Idiyakra’ may be derived from an Indigenous term associating it with a place near water."

However, "recent linguistic research has suggested that the term may be a mispronunciation of the two words ‘Yata Takarra’ meaning hard or stony ground in reference to the flat Ediacara plateau of dolomite that forms the centre of the Ediacara syncline."

Supporting this latter contention, it has been argued that the word "has nothing in it that corresponds to any word for water in any of the local languages" and that local tradition "has it that the name meant "granite plain", but, since there appears to be no igneous rock in the area, this could well refer to the hardness of the ground, rather than to its geological composition."

All content from Kiddle encyclopedia articles (including the article images and facts) can be freely used under Attribution-ShareAlike license, unless stated otherwise. Cite this article:
Ediacara Hills Facts for Kids. Kiddle Encyclopedia.