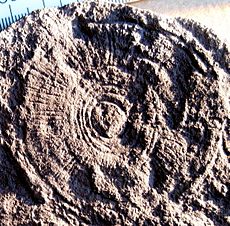 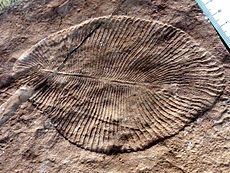 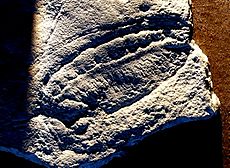 The biota is quite unusual, and there is no sign of it in the preceding Marinoan glaciation. The biota appears to suffer a fairly severe extinction event at the boundary with the Cambrian. Some of the biota may have survived into the early Cambrian.

Ediacaran-type fossils are recognised globally in 25 localities, and a variety of depositional conditions, and are commonly grouped into three main types, named after typical localities. Each assemblage occupies its own habitat, and after a burst of diversification changes little for the rest of its existence.

In the White Sea region of Russia, all three assemblage types have been found close together. This, and the faunas' overlap in time, makes it unlikely that they represent evolutionary stages. Since they are found on all continents except Antarctica, geographical boundaries do not appear to be a factor. The same fossils are found at all palæolatitudes.

Probably the three assemblages mark organisms adapted to survival in different environments. An analysis of one of the White Sea fossil beds, where the layers cycle from continental seabed to inter-tidal to estuarine and back again a few times, found that a specific set of Ediacaran organisms was associated with each environment.

It is no surprise that not all environments are exploited. Of 92 possible modes of life — combinations of feeding style, tiering and motility — no more than a dozen are occupied by the end of the Ediacaran. Just four are represented in the Avalon assemblage. The lack of large-scale predation and vertical burrowing are perhaps the most significant factors limiting the ecological diversity; the emergence of these during the early Cambrian allowed the number of lifestyles occupied to rise to 30.

All content from Kiddle encyclopedia articles (including the article images and facts) can be freely used under Attribution-ShareAlike license, unless stated otherwise. Cite this article:
Ediacaran biota Facts for Kids. Kiddle Encyclopedia.