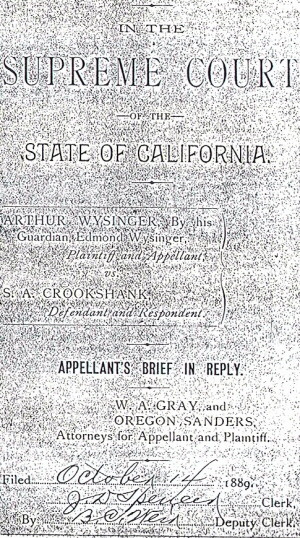 Edmond Edward Wysinger (1816–1891) was an African American pioneer in California, arriving around October 1849 at the beginning of the California Gold Rush.

On January 29, 1890, in the Visalia, California court case Wysinger vs. Crookshank, 82 Cal 588, 720, (1890), the California Supreme Court ruled that public school districts in California may not establish separate schools for children of African descent.

In 1862, Visalia was a community deeply divided by the American Civil War (1861–1865) and many sided with the South. Despite the turmoil, Wysinger stayed in the community. Wysinger, a self-educated man, worked as a laborer and part-time preacher. He stressed the importance of education for his children. He tried to admit his son Arthur to a regular public school but was refused, resulting in him entering a suit against the county school board of education in the Supreme Court of the State California in October 1888. On March 1, 1890, the California Supreme Court, in Wysinger vs. Crookshank reversed a lower court decision and ordered that 12-year-old Arthur Wysinger be admitted to Visalia's regular school system.

If the people of the state desired separate but equal schools for citizens of African descent, and Indians, their wish may be accomplished by laws enacted by the law-making department of the government in accordance with existing constitutional provisions. But this course had not been pursued, as the law stood in 1890, and the powers given to boards of education and school trustees, under section 1617 of the Political Code, did not include the right claimed by the board of education of Visalia. The laws segregating Chinese children, (see United States v. Wong Kim Ark), remained on the books probably because it was the general impression that only discriminatory laws aimed at African Americans and Indians were forbidden by the Fourteenth Amendment to the United States Constitution.

Wysinger was one of the first African Americans to migrate to California from the American South. He was born in 1816, the offspring of a Cherokee woman and a black man.

In the early part of 1849, at the age of 32, Wysinger and his German owner made the long perilous trip through Indian territory by ox-team Conestoga wagon to Grass Valley, California, by way of Donner Pass, arriving around October 1849 — the height of the California Gold Rush. Wysinger took on the last name of his slave owner; his original Indian name was Bush.

After arriving in the northern mine area of California's Mother Lode Gold Belt, Wysinger with a group of 100 or more African American miners, were surface mining in and around Morman, Mokelumne Hill, at Placerville and Grass Valley. Mokelumne Hill was called "Moke Hill". This region was first inhabited by a tribe of Miwok Native Americans who were called "Mokelumne", which means people of Mokel. "Moke Hill" began to grow after gold was discovered in 1848. Place names like Negro Hill, Negro Bar (a large sand bar located on the south bank of the lower American River) and Negro Flat attest to the presence of blacks in California. Wysinger mined at Mokelumne, Murphy's Camp, Diamond and Mud Springs, Grass Valley, Negro Bar and elsewhere in the mining districts of California. It took him about a year to buy his freedom for $1,000.

In 1853, Alfred and Susan Hines Wilson, arrived in Miles Creek in Mariposa County, California, from Wayne County in Missouri, going first to Texas then to California by way of ox-team. There were more than a 100 wagons in the ox-driven team lasting from March to December 1853. In Merced, Edmond Wysinger met and married their daughter, Penecia.

All content from Kiddle encyclopedia articles (including the article images and facts) can be freely used under Attribution-ShareAlike license, unless stated otherwise. Cite this article:
Edmond Edward Wysinger Facts for Kids. Kiddle Encyclopedia.