Edward the Exile facts for kids 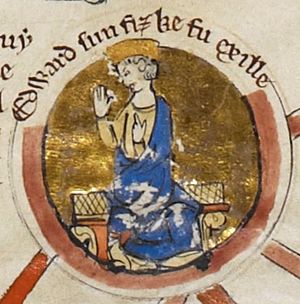 Edward the Exile depicted on a medieval genealogical scroll.

Edward the Exile (1016 – late August 1057), also called Edward Ætheling, was the son of King Edmund Ironside and of Ealdgyth. He spent most of his life in exile following the defeat and death of his father by Canute.

After the Danish conquest of England in 1016, Canute had Edward and his brother, Edmund, sent to the Swedish court of Olof Skötkonung. Edward was a baby at the time. Canute's agents apparently had orders to have the children murdered. But they were quickly taken to Hungary where neither Canut or his agents could reach them. He was brought up at the Hungarian court. Edward married Agatha, a relative of Emperor Henry II.

Edward the Confessor, King of England, had no children. Edward, his nephew, was his nearest living relative. The King wanted to make Edward his heir. In 1057, the king's messengers reached Edward living in Hungary. Edward agreed to return to England and in 1057 arrived in London with his family. But a few days after their arrival Edward was killed.

He and Agatha had three children, Edgar the Atheling, Margaret of Scotland and Cristina, Abbess of Romsey Abbey. In the summer of 1068 his son Edgar took his mother and sisters and escaped to Scotland.

All content from Kiddle encyclopedia articles (including the article images and facts) can be freely used under Attribution-ShareAlike license, unless stated otherwise. Cite this article:
Edward the Exile Facts for Kids. Kiddle Encyclopedia.