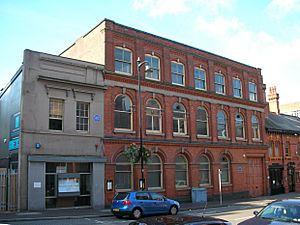 The Elkington Silver Electroplating Works was a building on Newhall Street in Birmingham, England. It later housed the Birmingham science museum Museum of Science and Industry until the creation of Thinktank.

Standing opposite the Birmingham Assay Office, the original 19th century silver electroplating factory of George Elkington, built in 1838, once occupied a much longer, grandiose building on Newhall Street which was largely demolished in the mid-1960s. The works had many workshops and warehouses along and over the Birmingham and Fazeley Canal and the now filled-in Whitmore's Arm (or Miss Colmore's Arm) canal, which ran through the site. In the early 1850s there was a steam-powered electric generator with 64 permanent magnets arranged in a circle and a rotating wrought iron armature. The electroplating process involved solutions of cyanide of silver and potassium cyanide.

The building carries two blue plaques on its wall, one to George Elkington, and another to his employee Alexander Parkes who is credited with inventing the first plastic.

Museum of Science and Industry

The site hosted the science museum of Birmingham Museum & Art Gallery from 1951 until its closure in 1997. Many exhibits were then moved to Thinktank, which later opened as an entrance-fee-based exhibition in Millennium Point in Eastside, in September 2001. Among the famous exhibits to move in the relocation was the 1797 Smethwick Engine, produced by famous local industrialist James Watt. It had originally been located in the town of Smethwick, before being relocated to the Birmingham Canal Navigation Workshops at Ocker Hill (actually some 10 miles away to a town named Tipton) in 1897. However, it came to the museum in 1959 on the closure of the workshops. Also moved to the new museum was Elkington's own Woolrich Electrical Generator, made in 1844, the earliest electrical generator used in an industrial process.

All content from Kiddle encyclopedia articles (including the article images and facts) can be freely used under Attribution-ShareAlike license, unless stated otherwise. Cite this article:
Elkington Silver Electroplating Works Facts for Kids. Kiddle Encyclopedia.