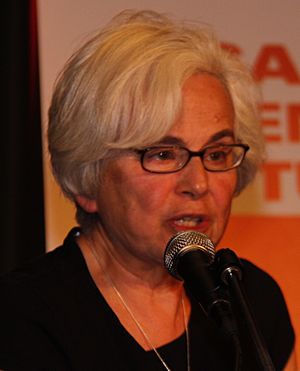 Ellen Meiksins Wood (April 12, 1942 – January 13, 2016) was an American-Canadian Marxist historian and scholar. She was a publisher of the Monthly Review from 1997 to 2000, along with Harry Magdoff and Paul Sweezy. She wrote over ten books. Her books The Retreat from Class and The Origin of Capitalism won awards. She was a leading Marxist theorist.

Wood was born in New York City. Her parents were Latvian Jews. She was married to Neal Wood until his death in 2003. They had two children. She was later married to politician Ed Broadbent.

All content from Kiddle encyclopedia articles (including the article images and facts) can be freely used under Attribution-ShareAlike license, unless stated otherwise. Cite this article:
Ellen Meiksins Wood Facts for Kids. Kiddle Encyclopedia.