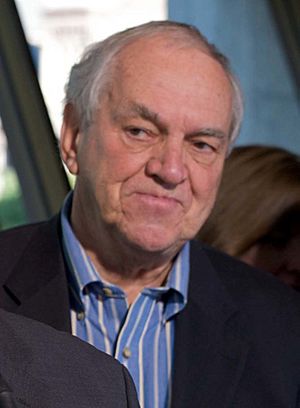 John Edward "Ed" Broadbent PC CC (born March 21, 1936) is a Canadian social-democratic politician, political scientist, and political activist. He is the chair of the Broadbent Institute. Broadbent was born in Oshawa, Ontario.

In the 2004 federal election, he returned to Parliament for one additional term as the Member of Parliament for Ottawa Centre. Before, he represented Oshawa in the parliament between 1968 to 1990.

Between 2014 until her death in 2016, he was married to historian Ellen Meiksins Wood.

All content from Kiddle encyclopedia articles (including the article images and facts) can be freely used under Attribution-ShareAlike license, unless stated otherwise. Cite this article:
Ed Broadbent Facts for Kids. Kiddle Encyclopedia.