Elwick is a village and civil parish in the borough of Hartlepool and the ceremonial county of County Durham, in England. It is situated near the A19 road to the west of Hartlepool. Hartlepool Borough Council governs Elwick. As Elwick is only a small parish it is not able to run itself as its own district. It does have a Parish Council. Elwick was known as a township until 1866, but then was changed to a civil parish status.

Mortality decline in the late 19th century was mainly due to the reduction of a very high infant mortality rates. But during the 20th and 21st centuries a decline in fertility rates and an improved life expectancy has changed the age structure of the population. Elwick has been described by John Marius Wilson in historic writings as, "Elwick, a township in Hart parish, Durham; 4 miles W by S of Hartlepool. It has a post office under Ferryhill. Acres, 1, 500. Real property, £1, 418. Pop., 240. Houses, 55. The township is a meet for the Durham hounds." – from the Imperial Gazetteer of England and Wales in 1870–72.

Saint Peters church is Church of England and the only church in Elwick. It has been described by the Archbishops' Council as "a small, friendly, family-orientated church." . It is a grade two listed building, listed in 1967. Protected by the English Heritage its ID number is: 59861. The church was built in the late 12th century, but has been restored many times. St Peters has aisled nave, chancel with north vestry and a south-west tower over looking the porch. The church has beautiful stained glass windows. The church commissioned a window depicting marriage, which was installed in February 2010 and designed by Alan Davis.

Elwick has two public houses – The Spotted Cow and the McOrville Inn. It has a village shop and post office. 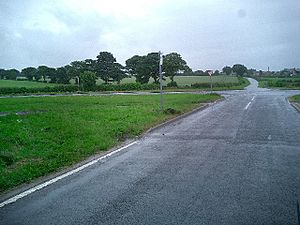 The road through Elwick

A main road runs through the centre of the village called Elwick road, easterly it connects the village to Hartlepool. To the west the road changes to Coal Lane that leads to the Black Woods and onto the A19.

Pauls Travel has service 65 bus through the village. Most journeys from Elwick transport people to Hartlepool. The Tees Flex bus service has been running since early 2020. The nearest airport is Teesside International Airport, which was RAF Middleton St George during World War II. There is no railway station; the nearest to Elwick is either Billingham or Hartlepool. 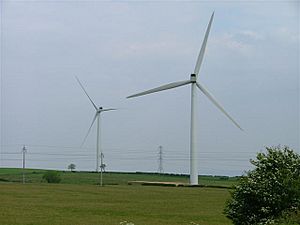 English Heritage have listed the disused, six-storey-high, brick Elwick windmill. Built in the mid-19th century and grade two listed on 8 January 1980, this windmill has been protected and preserved as a piece of Elwick's history. Apart from the historic buildings of the windmill and church, the majority of the development is residential housing. Elwick has green spaces and old farm buildings. It is not highly built up, or filled with industrial buildings.

The landscape is on low-lying land in a valley. The rocks date to the Triassic period (248–205 million years ago). The most common rock type found is red sandstone and mudstone that was deposited under arid sea conditions, with younger Permian period rock overlaid.

Elwick's main resource is its fertile land, with many farms near by; and a windy climate supporting its wind turbines to produce electricity.

The school in Elwick is St Peters Elwick Primary School

For higher education people travel out of the parish into Hartlepool. The linked secondary school is High Tunstall College of Science (Ofsted rated Good) there are 4 other secondary schools in Hartlepool - Dyke House Sports and Technology College, The English Martyrs School and Sixth Form College, Manor Community Academy, and St Hilda's Church of England School. Also for further education there is the Hartlepool College of Further Education and Teesside University.

All content from Kiddle encyclopedia articles (including the article images and facts) can be freely used under Attribution-ShareAlike license, unless stated otherwise. Cite this article:
Elwick, County Durham Facts for Kids. Kiddle Encyclopedia.