María Emilia Mernes Rueda (born 29 October 1996), known professionally as Emilia Mernes, or by the stage name as Emilia, is an Argentine singer, songwriter, dancer, model and actress signed to Sony Latin. Emilia is represented in management by the company Walter Kolm Entertainment. She began her solo career with the release of the single "Recalienta". She was later recognized for her hit "No soy yo" with Puerto Rican singer Darell. She is considered a promise of urban-pop music.

Born and raised in Nogoyá, Entre Ríos. Emilia's devotion to music began when she was just 12-years-old and her grandfather gave her a guitar. Since then creating melodies, strumming her guitar, singing and dancing have become her passions. Like any girl, she studied in college. She had chosen Literature, but after 6 months she realized that this career was not her thing. So she went home and asked her parents that she wanted to study music at UNR. However, she never made it to her first class. In her spare time she began to rehearse songs locked in the bathroom, because there was good acoustics. This is how she recorded her first cover and uploaded it to Instagram. From there, everything happened in fast motion. They asked her to do a casting in Buenos Aires, she traveled and got a place in the Rombai group. She replaced Rombai's former vocalist Camila Rajchman in 2016. Within a week, she was already doing her first show at Luna Park. Later, she left Rombai, became a soloist and went to live in Miami.

Before fame she used to post song covers on social media before debuting as a singer with the band Rombai. In 2012, she modeled for the clothing brand 47 Street after winning a modeling contest. Emilia rose to fame in 2016 as lead singer of the cumbia-pop group Rombai. From 2016 to 2018, the group performed on some of the most important stages of Latin America, until Emilia announced her departure from the group to focus on her solo career. 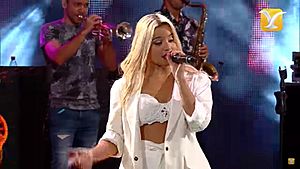 Mernes performing on 2017 with Rombai.

In 2019, after signing a contract with W. K. Entertainment and Sony Music, home of superstar acts such as Maluma, CNCO, Carlos Vives and Wisin, among other worldwide voices. Emilia released her debut single "Recalienta," which peaked at number 68 on the Billboard Argentina Hot 100. In May 2019 she collaborates with Ana Mena and Nio Garcia for the song "El Chisme". In August 2019, she released with Darell, the single "No Soy Yo", whose video is starring Joel Pimentel from CNCO , Oriana Sabatini and Johann Vera. On November 28, 2019 she collaborates in the song Boomshakalaka with Dimitri Vegas & Like Mike, Afro Bros, Sebastián Yatra and Camilo.In late 2019, Emilia released her third single "Billion". On January 30, 2020 she released the video and the single "Policía". In March 2020 she collaborates with the MYA duo for the song "Histeriqueo". She also released along with Vevo the song "No Más" a song first presented in February via Vevo DSCVR. Which managed to become the only video clip within the platform to exceed 1 million views, 2 million views and 3 million views in 2020 (Only 9 songs have managed to exceed 3 million views in all history in Vevo DSCVR) regardless of language or genre, in a short period of time. Today it accumulates more than 3.5 million views on YouTube and 1 million views on Spotify. In May it was listed as an official song. Also a model for brands such as Ripley in Chile and 47 Street in her native country, Emilia represents the global fashion brand Benetton as an ambassador.

Musically, Emilia's songs have been described as reggaeton, pop, and urban pop. Emilia as a composer wrote with other composers a song for Lele Pons called "Bloqueo". Emilia released "Já É Tarde (No Más)" on August 14, 2020 with the Brazilian singer Bianca. On October 15,she released his new hit "Bendición" with the Puerto Rican singer Alex Rose. On May 18 she released Perreito Salvaje with the Panamanian singer Boza.

Emilia began a relationship with the Uruguayan singer Fer Vázquez in 2016 after being part of the band "Rombai". Then in 2018 they ended their love relationship. Emilia is now single.

All content from Kiddle encyclopedia articles (including the article images and facts) can be freely used under Attribution-ShareAlike license, unless stated otherwise. Cite this article:
Emilia Mernes Facts for Kids. Kiddle Encyclopedia.