Emperor Kaika (開化天皇code: ja is deprecated , Kaika-tennō) is the 9th emperor of Japan, according to the traditional order of succession. Historians consider Emperor Kaika to be a legendary person; and the name Kaika-tennō was created for him posthumously by later generations.

No certain dates can be assigned to the emperor's life or reign. The conventionally accepted names and sequence of the early emperors were not to be confirmed as "traditional" until the reign of Emperor Kammu, who was the 50th monarch of the Yamato dynasty.

The Gukanshō records that Kaika ruled from the palace of Isakawa-no-miya at Kasuga in what will come to be known as Yamato province.

Kaika is almost certainly a legend. The Kojiki records only his name and genealogy. The Nihonshoki includes Kaika as the eighth of "eight undocumented monarchs" (欠史八代,code: ja is deprecated , Kesshi-hachidai).

Kaika was the second son of Emperor Kōgen.

Some scholars question the existence of the first nine emperors. These critics consider Kōgen's son (Suijin) to be the earliest to have actually existed. 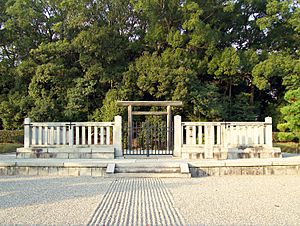 The mausoleum (misasagi) of Emperor Kaika in Nara Prefecture.

The absence of information about Kaika does not imply that no such person ever existed. Very little information is available for study prior to the reign of the 29th monarch, Emperor Kimmei.

This emperor's official name after his death (his posthumous name) was regularized many centuries after the lifetime which was ascribed to Kaika.

The actual site of his grave is not known. According to the Imperial Household Agency, this emperor is venerated at a memorial Shinto shrine (misasagi) in Nara.

All content from Kiddle encyclopedia articles (including the article images and facts) can be freely used under Attribution-ShareAlike license, unless stated otherwise. Cite this article:
Emperor Kaika Facts for Kids. Kiddle Encyclopedia.