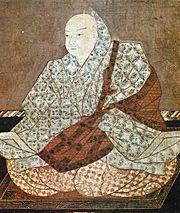 Emperor Toba (鳥羽天皇, Toba-tennō, February 24, 1103 – July 20, 1156) was the 74th emperor of Japan. Toba's reign spanned the years from 1107 through 1123. He became Emperor when he was 5 years old. He abdicated the throne when he was 20 years old. At this time the Emperors of Japan only filled a background role in politics. The elaborate court system of Insei was coming to an end as Japan had already turned to feudalism and Militarism.

All content from Kiddle encyclopedia articles (including the article images and facts) can be freely used under Attribution-ShareAlike license, unless stated otherwise. Cite this article:
Emperor Toba Facts for Kids. Kiddle Encyclopedia.