The Emu War, also called the Great Emu War, was a military operation in Australia. The army tried to kill many emus because they were pests. The war was fought in late 1932. Farmers were having trouble with the many emus invading the Campion district of Western Australia. Soldiers used Lewis guns to try to kill the emus, a large flightless bird. The media called it the "Emu War" when describing the military action. The army did kill some birds. The emu population stayed large and continued to destroy crops. 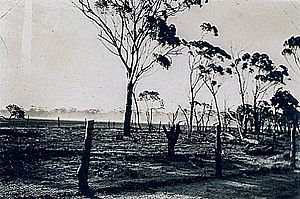 Bare fields after attacks by emus

After World War I, the Australian government gave land to many ex-soldiers from Australia and some from Great Britain. The government gave these settlers land to farm in Western Australia. Much of the land was not very good. When the Great Depression hit Australia in 1929, the government told these farmers to grow more wheat. The government promised to help by giving money to farmers, but did not. Wheat prices continued to fall, and by October 1932 there were major problems in Western Australia. The farmers were ready to harvest the season's crop but also threatening to refuse to deliver the wheat.

Farmers lives and work became even more difficult when about 20,000 emus arrived. Emus regularly migrate after breeding each year. They return to the coast from inland areas. Western Australian farmers had cleared more land and improved water supplies for their livestock and crops. The emus found that the settlers' farm lands were good places to live. They began to move into farms. Many moved into the farms around Chandler and Walgoolan. The emus ate and ruined the crops. They also made large holes in fences where rabbits could enter and cause more problems. 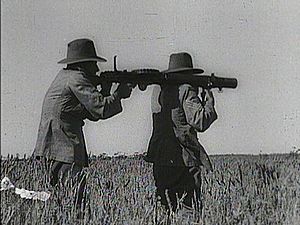 Farmers complained to the government about the birds destroying their crops. A group of veteran settler-farmers went to meet with the Minister of Defence, Sir George Pearce. The settler-farmers had been soldiers in World War I. They knew how powerful machine guns were. They asked the government to send machine guns. The minister agreed. But, he had some requests of his own: soldiers must use the guns, not the settler-farmers; the Western Australian government would pay to transport the soldiers; and, the farmers would give food and housing, and pay for the bullets. Pearce also wanted to send the guns because the birds would make good target practice. Some in the government may have thought the military operation was a good way to be seen helping the Western Australian farmers, to stop the secession movement that was starting. A cinematographer from Fox Movietone was also joined the military campaign. 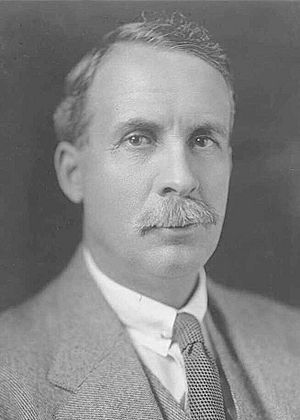 Military involvement was due to begin in October 1932. The "war" was conducted under the command of Major G. P. W. Meredith of the Seventh Heavy Battery of the Royal Australian Artillery, with Meredith commanding soldiers Sergeant S. McMurray and Gunner J. O'Halloran, armed with two Lewis guns and 10,000 rounds of ammunition. The operation was delayed, however, by a period of rainfall that caused the emus to scatter over a wider area. The rain ceased by 2 November 1932, whereupon the troops were deployed with orders to assist the farmers and, according to a newspaper account, to collect 100 emu skins so that their feathers could be used to make hats for light horsemen.

On 2 November the men travelled to Campion, where some 50 emus were sighted. As the birds were out of range of the guns, the local settlers attempted to herd the emus into an ambush, but the birds split into small groups and ran so that they were difficult to target. Nevertheless, while the first fusillade from the machine guns was ineffective due to the range, a second round of gunfire was able to kill "a number" of birds. Later the same day a small flock was encountered, and "perhaps a dozen" birds were killed.

Next, on 4 November, Meredith prepared an ambush near a local dam. More than 1,000 emus were seen heading towards Meredith and his soldiers. This time the gunners waited until the birds were very close. Then, they started to fire their guns. The guns jammed after only twelve birds were killed. The surviving birds ran away before any more could be shot. No more birds were sighted that day.

After losing the Battle of the Dam, Meredith moved further south, because he heard the birds were "fairly tame". But, again he had only limited success even though he and his men tried very hard to kill more emus. By the fourth day of the campaign, army observers reported that birds seemed well organized. "Each pack seems to have its own leader now  – a big black-plumed bird which stands fully six feet high and keeps watch while his mates carry out their work of destruction and warns them of our approach". Meredith was desperate. He even tried to put one of the guns on a truck. This failed because the truck was slower than the emus. The ride was so rough that the gunner could not fire any shots. By 8 November, six days after the first fighting, the army had fired 2,500 bullets. Nobody know how many birds were killed. One estimate was 50 birds. Others said from 200 to 500 birds. Settlers gave the large estimate. Meredith's official report said that none of his men were injured.

On 8 November, members in the Australian House of Representatives discussed the operation. Following the negative coverage of the events in the local media, that included claims that "only a few" emus had died, Pearce withdrew the military personnel and the guns on 8 November.

After the withdrawal, Major Meredith compared the emus to Zulus and commented on the striking manoeuvrability of the emus, even while badly wounded.

If we had a military division with the bullet-carrying capacity of these birds it would face any army in the world ... They can face machine guns with the invulnerability of tanks. They are like Zulus whom even dum-dum bullets could not stop.

After the army retreated, the emu continued to attack crops. Farmers again asked for support, citing the hot weather and drought that brought emus invading farms in the thousands. James Mitchell, the Premier of Western Australia lent his strong support to renewal of the military assistance. At the same time, a report from the Base Commander was issued that indicated 300 emus had been killed in the initial operation.

12 November the Minister of Defence approved starting the war again because of the settlers requests and the Base Commander's report. He explained the decision to the Senate. He said the soldiers were necessary to combat the serious agricultural threat from the large emu population. The army had agreed to lend the guns to the Western Australian government. The army expected people from the Western Australian government would use the guns. But, there were non enough experienced machine gunners in the state, so Meredith was sent to fight again.

Taking to the field on 13 November 1932, the military were successful during the first two days. They killed about 40 of the invading emus. The third day, 15 November, was less successful. By 2 December, the soldiers were killing about 100 emus per week. Meredith was recalled on 10 December, and in his report he claimed 986 kills with 9,860 rounds, at a rate of exactly 10 rounds per confirmed kill. In addition, Meredith claimed 2,500 wounded birds had died as a result of the injuries that they had sustained. In assessing the success of the cull, an article in the Coolgardie Miner on 23 August 1935 reported that although the use of machine guns had been "criticised in many quarters, the method proved effective and saved what remained of the wheat". 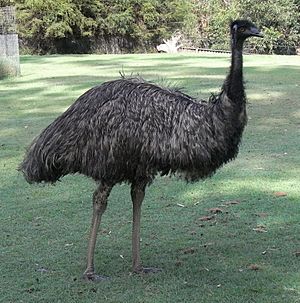 Despite being attacked by the Australian Army, the IUCN rates the Emu as a species of least concern.

Throughout 1930 and onward, exclusion barrier fencing became a common way to keep emus out of agricultural areas. Such fencing also kept out other vermin, such as dingoes and rabbits).

By December 1932, word of the Emu War had spread, reaching the United Kingdom. Some conservationists there protested the cull as "extermination of the rare emu". Dominic Serventy and Hubert Whittell, the eminent Australian ornithologists, described the "war" as "an attempt at the mass destruction of the birds". 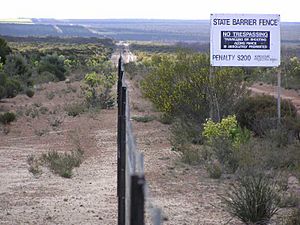 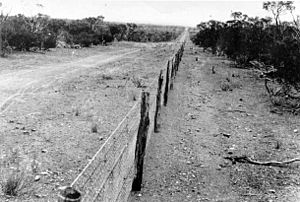 The war had been a failure and there were problems with the cull. But, the farmers of the region asked the army to fight the emu again in 1934, 1943, and 1948. Each time the government said no. They refused to fight the birds. Instead, the government continued the bounty system that had started in 1923. This was effective. During six-months of 1934, Western Australians killed 57,034 emu and claimed their bounties.

In November 1950, Hugh Leslie, a newspaper editor and state and federal politician from Western Australia, complained about emus in federal parliament. He asked the Army Minister Josiah Francis to give .303 ammunition from the army to farmers to kill the emus. The minister approved giving 500,000 bullets to the farmers.

All content from Kiddle encyclopedia articles (including the article images and facts) can be freely used under Attribution-ShareAlike license, unless stated otherwise. Cite this article:
Emu War Facts for Kids. Kiddle Encyclopedia.