The Lewis gun was invented by U.S. Army colonel Isaac Newton Lewis in 1911, based on initial work by Samuel Maclean.

The start of the First World War increased demand for the Lewis gun. BSA began production, under the name Model 1914. The design was officially approved for service on 15 October 1915 under the name "Gun, Lewis, .303-cal." No Lewis guns were produced in Belgium during the war; all manufacture was carried out by BSA in England and the Savage Arms Company in the US. 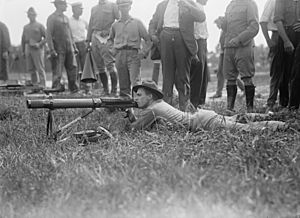 The Lewis was produced by BSA and Savage Arms during the war. The two versions were very similar, but there were enough differences to stop them being completely interchangeable. This problem was fixed by the time of the Second World War. 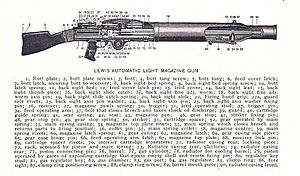 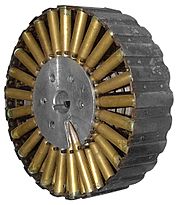 A 97-round pan magazine, as used on a 7.92×57mm Lewis gun, Museum of Coastal Defence, Poland. Note the magazine is only partially filled.

The Lewis gun was gas operated. 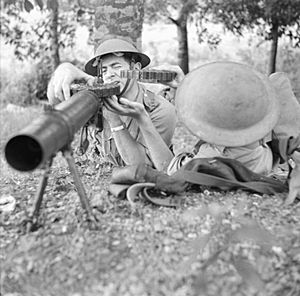 Recruits of the Singapore Volunteer Force training with a Lewis gun, 1941 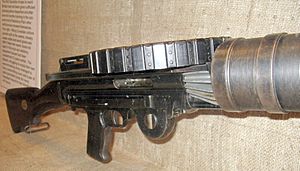 A Lewis gun at the Elgin Military Museum Canada. The rear end of finned aluminium heat sink, that fits within the gun's cooling shroud, can be seen

The Lewis gun used a pan magazine holding 47 or 97 rounds.

The gun fired about 500–600 rounds per minute. It weighed 28 lb (12.7 kg), only about half as much as a typical medium machine gun of the era, such as the Vickers machine gun. It could be carried and used by one soldier. 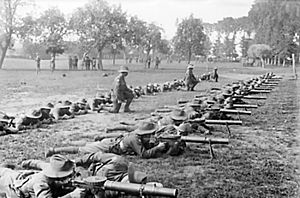 Men of the 28th Battalion of the 2nd Australian Division practising Lewis gun drill at Renescure. 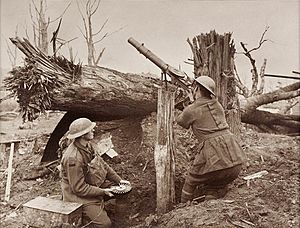 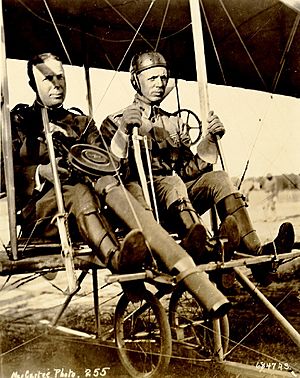 Captain Charles Chandler (with prototype Lewis Gun) and Lt Roy Kirtland in a Wright Model B Flyer after the first successful firing of a machine gun from an aeroplane in June 1912. 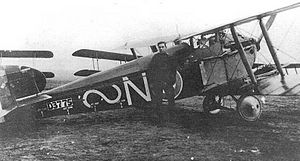 No. 87 Squadron Dolphin flown by Cecil Montgomery-Moore. A Lewis gun is mounted atop the lower right wing

The Lewis was the first machine gun fired from an airplane. On 7 June 1912, Captain Charles Chandler of the US Army fired a Lewis gun from the foot-bar of a Wright Model B Flyer. 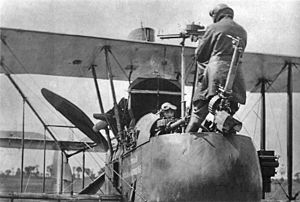 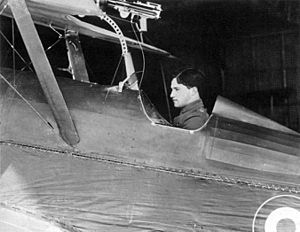 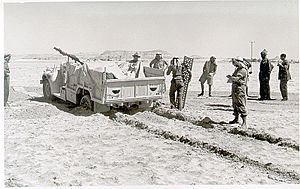 A New Zealand-crewed LRDG truck (equipped with a Lewis Gun) is dug out of the sand, c.1942. 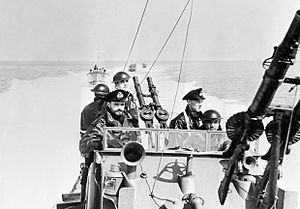 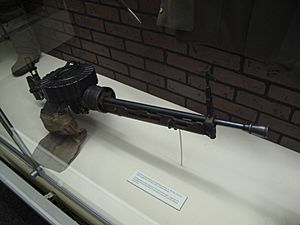 All content from Kiddle encyclopedia articles (including the article images and facts) can be freely used under Attribution-ShareAlike license, unless stated otherwise. Cite this article:
Lewis gun Facts for Kids. Kiddle Encyclopedia.