Environment of Pennsylvania facts for kids 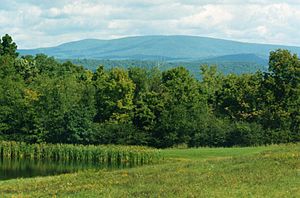 Blue Knob Mountain in the Quaker Valley of Pennsylvania

Pennsylvania also has a vast amount of landfills. In total, Pennsylvania has 45 municipal waste landfills, 3 construction/demolition waste landfills, 4 residual waste landfills, and 6 resource recovery/waste to energy landfills. Below is a table of the 45 municipal landfills and their daily volume of trash entering the landfills daily. These landfills are not only holding the trash of the citizens of Pennsylvania, but they also hold the trash of other states. Pennsylvania is one of the main states that imports waste. Much of Pennsylvania's waste comes from neighboring states such as New Jersey and New York. In fact, Pennsylvania has more trash per person at 34.5 tons of trash per person than every other sate except Nevada in 2016. However, this process of importing waste is very lucrative for the Pennsylvania counties by providing labor market opportunities and helps increase the municipality's budgets by fees paid by these exporting states. For example, Throop, Pennsylvania $6 million budget is made up of $4 million from the host feels paid from importing other state's waste. 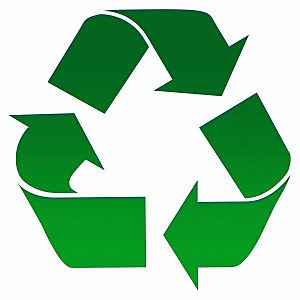 One way to reduce the amount of waste going to the Pennsylvania landfills is to have a recycling campaign. Recycling statewide began with the instatement of the Municipal Waste Planning Recycling and Waste Reduction Act, also known as Act 101 in July 1988. Act 101 at this time had four major goals:

These plans were going to be implemented throughout several phases within each municipality over the following years. A county's responsibilities were to manage the municipalities recycling efforts. In efforts to manage the municipalities the county would have to have a solid waste plan in place by March 1991, which would be revised every 3 years, and to submit annual reports to the state based on the efforts of each municipality's recycling efforts. These annual reports would then be combined to create a statewide report of its recycling efforts and the benefits gained by doing so. This act was funded by the Recycling Fund which created a $2-per-ton fee on all waste entering the landfills known as the recycling fee. In addition to the Recycling Fund they also received other grants such as the household hazardous Waste Collection and Disposal Grants, Host Municipality Inspector Grants, and Independent Permit Application Review Grants.

Act 101 in its essence is still in place today for all municipalities and has only been revised twice to help strengthen and grow the program. The most recent change to Act 101 happened in May 2010 which is the extension of the collection of the recycling fee of $2-per-ton to 2020. Other changes to Act 101 are Act 140 which established requirement for the spending of grants over 10,000 given to communities by Act 101. Act 140 also gave municipalities requirements such as:

The most recent results of these acts are as followed:

Pennsylvania's beautiful landscapes can be seen through its many national parks. In fact, Pennsylvania has 19 National Parks throughout the state. However, Pennsylvania has an additional 9 park sites that are either affiliated or managed by the National Park Service. This allows for a number of different avenues to bring in revenue throughout the parks within Pennsylvania that receive 9,935,361 individuals visiting them each year. These visitors create an overall economic benefit of $453,100,000 from tourism at these sites. This economic benefit can be the result of entrance fees, food purchases, and souveniors. Below is a table of the 19 National State Parks in Pennsylvania and their yearly operation costs and personal costs from the 2017 fiscal year. These operating costs are what are deducted from the parks revenue to find the total profit of each park. These operations costs include things such as maintenance of the parks and wages for park workers. The yearly personal costs are the costs of entrance for the parks. In addition, the table includes the yearly visitation of the parks to show the number of visitors that went through during the 2014 year. To begin to see a portion of the revenue made by these parks is the revenue made by entrance fees. To find this portion of the revenue, multiply the yearly visitation and the yearly personal costs. This will result in only one small portion of the yearly revenue that these parks produce.

All content from Kiddle encyclopedia articles (including the article images and facts) can be freely used under Attribution-ShareAlike license, unless stated otherwise. Cite this article:
Environment of Pennsylvania Facts for Kids. Kiddle Encyclopedia.