Epes has its origins in Fort de Tombecbé (Fort Tombecbe), one of the major fortifications built under Louis XIV of France, in what is now the American south, in the early eighteenth century. In January 1736, Jean-Baptiste Le Moyne, Sieur de Bienville, governor of Louisiana, recruited a Swiss officer serving with the French, Joseph Christophe de Lusser, to construct a fort on the Tombigbee River, "atop an 80-foot bluff to support his campaign against the Chickasaws" that was to proceed in the year following; Bienville visited the site in April of the same year, and took control of the construction, leading to its completion and its support of his martial efforts against the Native Americans. After a 26-year stay, during which the French used this and other holdings to check "westward expansion by the British into the French colony of Louisiana," and to serve "as a trading post, solidifying France's relations with the Choctaws... the most powerful French ally in the area," the French ceded the fort, with most of its North American territory, to Great Britain under the Treaty of Paris, surrendering Tombecbé in November 1763; the British inspected and renamed it Fort York, although its actual inhabitation would await a recurrence of hostilities between the Choctaw and Creek Indians in 1766. Records of those overseeing the fort in this period document the challenge of supplying such a remote location, and after a 1768 truce ended the hostilities between the Choctaw and Creeks, the British abandoned Fort York, with Choctaws being the remaining inhabitants of the area until this tribe ceded a small parcel of land that included the fort to the Spanish in 1792/1793, under the Treaty of Boucfouca. As little of the original fortification structures remained when Spain arrived to take control in 1794, the Spanish chose to construct "a smaller but more substantial earthen structure" (rather building further wooden fortifications); they renamed the site and their resulting structure Fort Confederacion, in recognition of the alliance the Spanish had struck with Native American groups to assist them in resisting encroachment by commerce and settlements from the United States. Fortifications were completed before the beginning of 1796, in time to provide support to the Spanish when war broke out with the United States, and when hostilities began again between the Chickasaw and Creek Indians; the Treaty of San Lorenzo, between Spain and the young U.S., ended that part of the hostilities, and ceded Spanish territory "above the 31st parallel," including the Fort, to the U.S, "thus marking the end of the European colonial era in Alabama."

Epes was incorporated in 1899 and named for Dr. John W. Epes, who donated the right-of-way for Southern Railroad (if the town would be named Epes). The town is located on the high bluffs of the Tombigbee River. Standing on the bluffs, you could hear the ferries and steamboats traveling down river. During its prime, it was known as the transportation and business and service center. It had three cotton gins, a cotton compress, cotton seed oil mill, creamery, handle company, The Casey Hotel, The Bowers Boarding House, a school, two grocery stores, a drug store, general merchandising stores, and two livery stables. The second stockyard in Alabama opened in Epes in 1936.

There were 80 households, out of which 30.0% had children under the age of 18 living with them, 37.5% were married couples living together, 15.0% had a female householder with no husband present, and 42.5% were non-families. 38.8% of all households were made up of individuals, and 11.3% had someone living alone who was 65 years of age or older. The average household size was 2.58 and the average family size was 3.65. 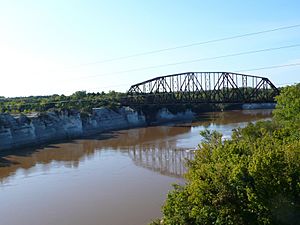 The climate in this area is characterized by hot, humid summers and generally mild to cool winters. According to the Köppen Climate Classification system, Epes has a humid subtropical climate, abbreviated "Cfa" on climate maps.

All content from Kiddle encyclopedia articles (including the article images and facts) can be freely used under Attribution-ShareAlike license, unless stated otherwise. Cite this article:
Epes, Alabama Facts for Kids. Kiddle Encyclopedia.