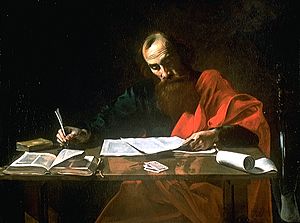 An epistle (from the Greek: ἐπιστολή, epistolē, meaning "letter") is a writing sent to a person or group of people. It is usually written as a formal letter. It was common in ancient Egypt, being taught to scribes. The letters in the New Testament from Apostles to Christians are usually referred to as epistles. Those letters said to have been written by Paul are known as the Pauline epistles and the others as the General epistles.

The epistles of Cicero, and of Pliny the Younger tell a lot about life at the time of the Romans. Ovid produced a number of letters while he was in exile at coast of the Black Sea, Seneca's letters influenced many epistle-writers of later times.

All content from Kiddle encyclopedia articles (including the article images and facts) can be freely used under Attribution-ShareAlike license, unless stated otherwise. Cite this article:
Epistle Facts for Kids. Kiddle Encyclopedia.