Eraclea is a town in the province of Venice, Veneto, Italy. SP42 goes through it. Eraclea Mare is the Lido of Eraclea.

It is located on the Adriatic Sea near the coast between the rivers Piave and Livenza and between two famous touristic towns: Caorle and Jesolo.

Eracleamare, one of the destinations of summer tourism on the Adriatic riviera, is together with Jesolo and Caorle one of the best known seaside resort on the Venetian coast. Within the last year, a steady growth of foreign tourists, especially from Germany, has been recorded.

Eraclea Mare is famous cause of its pinewood and "Mort lagoon".

The Mort Lagoon, an extremely evocative naturalistic site between Eraclea and Jesolo, was originated by the overflowing of the Piave river in 1936, whose bed was modified in its last stretch after a big flood. The Mort stretches between Eraclea Mare and the mouth of the Piave river and it is a sea-lagoon, being supplied with water only by the flood-tides. Still uncontaminated, the Mort is characterized by shallow and calm waters with a sandy and muddy seabed, rich in phytoplankton. 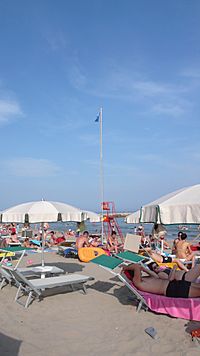 All content from Kiddle encyclopedia articles (including the article images and facts) can be freely used under Attribution-ShareAlike license, unless stated otherwise. Cite this article:
Eraclea Facts for Kids. Kiddle Encyclopedia.