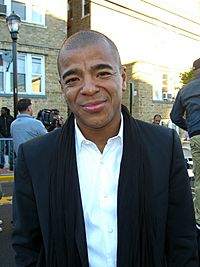 Erick Morillo (March 26, 1971 – September 1, 2020) was a Colombian-American disc jockey, music producer, and record label owner. Morillo was best known for his international work in house music for the label Strictly Rhythm. He helped produce the 1993 hit "I Like to Move It".

He won the Muzik magazine "Remixer of the Year" award in 1999.

All content from Kiddle encyclopedia articles (including the article images and facts) can be freely used under Attribution-ShareAlike license, unless stated otherwise. Cite this article:
Erick Morillo Facts for Kids. Kiddle Encyclopedia.