Erysimum cheiranthoides, the treacle-mustard, wormseed wallflower, or wormseed mustard is a species of Erysimum native to most of central and northern Europe and northern and central Asia. Like other Erysimum species, E. cheiranthoides accumulates two major classes of defensive chemicals, glucosinolates and cardiac glycosides.

It is a herbaceous, annual plant similar in appearance to many other mustards, growing an erect stem 15–100 cm (5.9–39.4 in), (rarely 150 cm) tall. The leaves are lanceolate to elliptic, 2–11 cm long and 0.5–1 cm broad, with an entire to coarsely toothed margin. It blooms in summer, between June and August. The flowers are bright yellow, 5–12 mm diameter, produced in an erect inflorescence. Later, it produces a slender cylindrical capsule, 1–3 cm (rarely 5 cm) long, containing several small, pale brown, or dark brown seeds.

It was formerly described by the Swedish botanist Carl Linnaeus in his seminal publication 'Species Plantarum' in 1753, on page 661.

It is commonly known as treacle-mustard, or wormseed wallflower. The treacle mustard name came from the Greek word 'theriaki' meaning antidote to poisonous bites as the plant was thought to have healing properties. The name 'wormseed mustard' arose from the seeds of the plant being made into treacle, to treat intestinal worms in children. 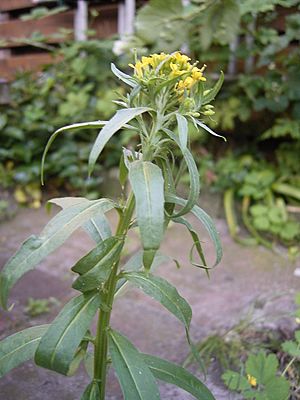 Erysimum cheiranthoides is native to temperate areas of Europe and Asia.

It is found in Asia within China (in the provinces of Heilongjiang, Jilin, Nei Monggol and Xinjiang), Japan, Korea, Mongolia and Siberia. In Eastern Europe, it is found in Belarus, Estonia, Latvia, Lithuania, Moldova and Ukraine. In middle Europe, it is found within Austria, Belgium, the Czech Republic, Germany, Hungary, the Netherlands, Poland, Slovakia and Switzerland. In Northern Europe, in Denmark, Finland, Norway, Sweden and the United Kingdom. In Southeastern Europe, within Bosnia and Herzegovina, Bulgaria, Croatia, France, Romania, Serbia and Slovenia.

It is also widely naturalised outside of its native range, from New Zealand, other parts of Europe, to North America, (including parts of Canada and Argentina (in Tierra del Fuego).

Predatory paper wasps (Polistes dominulus) required more time to consume Pieris napi (green-veined white) caterpillars that had fed on E. cheiranthoides than those that had fed on Brassica oleracea (cabbage). This was ascribed to the time that it took the wasps to selectively remove the caterpillar guts, which contained plant material.

Use as a model organism 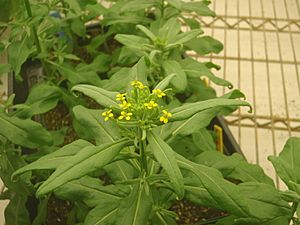 Because Erysimum is in the family Brassicaceae, it has been proposed that many of the genetic resources that already exist for Arabidopsis thaliana (an extensively studied model organism) can be used with Erysimum to aide in genetic analysis, making this genus particularly attractive for studying the cardenolide biosynthetic pathway. E. cheiranthoides itself is diploid and has a relatively small genome (~200 Mbp across 8 chromosomes), can be grown from seed to seed production as fast as 10 weeks, and performs well in a laboratory setting. The genome of E. cheiranthoides variety Elbtalaue has been sequenced. As E. cheiranthoides has many genetic similarities to A. thaliana, it is likely that techniques for genetically modifying A. thaliana and related research methods will also work for E. cheiranthoides. Mutated isolates of E. cheiranthoides with altered cardiac glycoside content have been identified.

All content from Kiddle encyclopedia articles (including the article images and facts) can be freely used under Attribution-ShareAlike license, unless stated otherwise. Cite this article:
Erysimum cheiranthoides Facts for Kids. Kiddle Encyclopedia.