Kids Encyclopedia Facts
Not to be confused with Elton, Cambridgeshire. 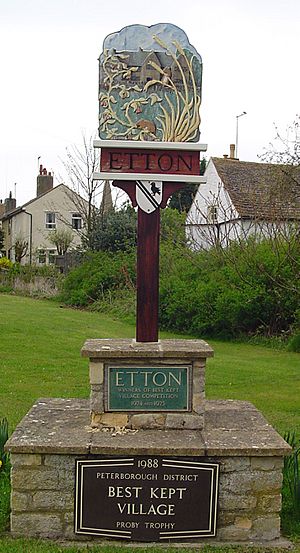 Etton is a village and civil parish in the unitary authority area of the city of Peterborough, Cambridgeshire, in England. For electoral purposes it forms part of Northborough ward in North West Cambridgeshire constituency. The parish had a population of 158 persons and 58 households in 2001.

Woodcroft is a deserted medieval village and site of Woodcroft Castle.

A mysterious Neolithic settlement at Etton Woodgate was excavated by Francis Pryor in 1982. He reported that the site was in two halves, with each working building on one side mirrored by an unused 'ritual' copy on the other.

Woodcroft Castle was built and moated about 1280. The west range and a corner tower survive in the present farmhouse. During the civil war it fell to Parliamentary troops in 1648.

Peterborough Corporation Water Works opened here in 1907 "to augment the supply of water to the City of Peterborough."

All content from Kiddle encyclopedia articles (including the article images and facts) can be freely used under Attribution-ShareAlike license, unless stated otherwise. Cite this article:
Etton, Cambridgeshire Facts for Kids. Kiddle Encyclopedia.