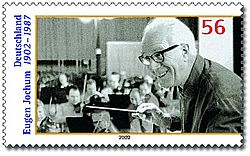 Jochum was born in Babenhausen, near Augsburg, in the south of Germany. He soon showed musical talent and was playing the organ for church services when he was eight. He studied at the Augsburg Conservatory and then the Munich National Theatre and at Mönchen-Gladbach. He became conductor of the Kiel Opera where, during three years, he conducted more than 50 operas in several German cities. Then, in 1934, he followed Karl Böhm and Karl Muck as the conductor of the Hamburg Staatsoper. He stayed there until 1949. He also was guest conductor in Amsterdam with the Concertgebouw Orchestra and later he became chief conductor.

He appeared regularly at Salzburg and, from 1953, Bayreuth. The first opera he conducted there was Wagner's Tristan und Isolde.

Jochum is remembered especially for his warm, romantic performances of Anton Bruckner's symphonies. He often conducted the passions of Bach and music by composers such as Beethoven, Brahms, Mozart, Haydn, Schumann, Wagner and Carl Orff.

Jochum died in Munich, Germany at the age of 84.

All content from Kiddle encyclopedia articles (including the article images and facts) can be freely used under Attribution-ShareAlike license, unless stated otherwise. Cite this article:
Eugen Jochum Facts for Kids. Kiddle Encyclopedia.