Eurois occulta, the great brocade or great gray dart, is a moth of the family Noctuidae. It is found in northern and central Europe, North Asia and central Asia to the Pacific Ocean and Japan. Also the northern parts of North America (coast to coast in Canada, south in east to Virginia and the Great Lakes states) ( a Holarctic distribution). In addition, it is found in Greenland and Iceland. In the south in northern Spain and on the Balkan peninsula. 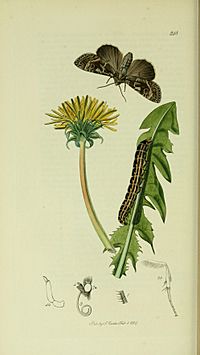 The wingspan is 50–60 mm. Forewing pale grey, more or less suffused with dark grey; a black streak from base below cell; stigmata large, grey, with black outlines, the cell dark: inner and outer lines filled in with whitish; submarginal line formed of large black and white teeth; hindwing fuscous, the fringe white. This fine species occurs - The form implicata is nearly black, a mountain form, found in Finland, on the Harz Mts. in Germany, and in Scotland. — ab. extricata Zett. from Lapland is an intermediate form.

It has been suggested, based partly on pupal remains in peat, that outbreaks of this species played a role in the collapse of Viking settlements in Greenland. These deposits at Anavik are now dried out and any potential evidence has been lost.

All content from Kiddle encyclopedia articles (including the article images and facts) can be freely used under Attribution-ShareAlike license, unless stated otherwise. Cite this article:
Eurois occulta Facts for Kids. Kiddle Encyclopedia.