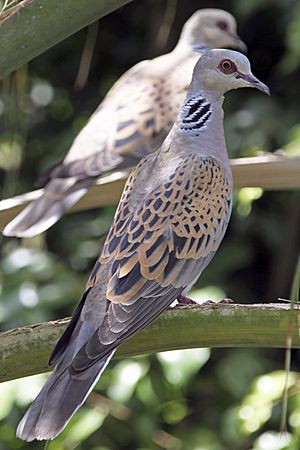 The European turtle dove (also known as turtle dove) is a member of the Dove bird family. They are smaller than many other doves.

The turtle dove is native to Europe, Asia and Africa.

Turtle doves are talked about in the song "The Twelve Days of Christmas".

There aren't as many of these birds in Europe as there used to be.

Smaller and slighter in build than many other doves, it measures 24–29 cm (9.4–11.4 in) in length, 47–55 cm (19–22 in) in wingspan and weighs 85–170 g (3.0–6.0 oz). the European turtle dove may be recognised by its browner colour, and the black-and-white-striped patch on the side of its neck. The tail is notable as the bird flies from the observer; it is wedge shaped, with a dark centre and white borders and tips. When viewed from below, this pattern, owing to the white under-tail coverts obscuring the dark bases, is a blackish chevron on a white ground. This can be seen when the bird stoops to drink and raises its spread tail. 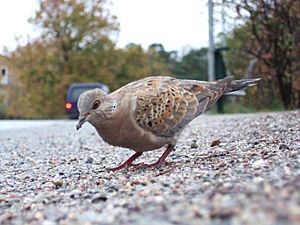 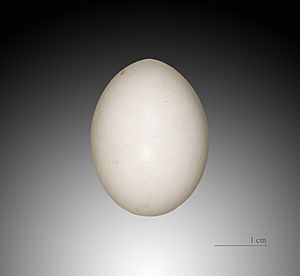 The mature bird has the head, neck, flanks, and rump blue grey, and the wings cinnamon, mottled with black. The breast is vinaceous, the abdomen and under tail coverts are white. The bill is black, the legs and eye rims are red. The black and white patch on the side of the neck is absent in the browner and duller juvenile bird, which also has the legs brown.

The turtle dove, one of the latest migrants, rarely appears in Northern Europe before the end of April, returning south again in September.

It is a bird of open rather than dense woodlands, and frequently feeds on the ground. It will occasionally nest in large gardens, but is usually extremely timid, probably due to the heavy hunting pressure it faces during migration. The flight is often described as arrowy, but is not remarkably swift.

The nuptial flight, high and circling, is like that of the common wood pigeon, but the undulations are less decided; it is accompanied by the whip-crack of the downward flicked wings. The arrival in spring is heralded by its purring song, a rather deep, vibrating “turrr, turrr”. Despite the identical spelling, the "turtle" of the name, derived from Latin turtur, has no connection with the reptile; "turtle" in this case came originally from Latin tortur, onomatopoeic for the song. The genus name Streptopelia is from Ancient Greek streptos, "collar" and peleia, "dove".

The turtle dove was, according to Aelian, sacred to Demeter.

In Roman Mythology, the turtle-dove was one of the emblems of Fides (deity). 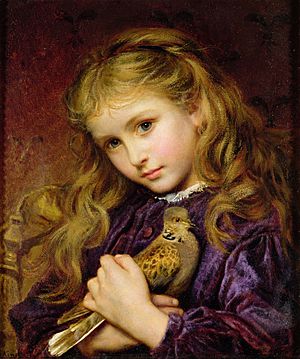 Perhaps because of Biblical references (especially the well-known verse from the Song of Songs), its mournful voice, and the fact that it forms strong pair bonds, European turtle doves have become emblems of devoted love. In the New Testament, two turtle doves are mentioned as the customary offering during the Presentation of Jesus at the Temple. In Renaissance Europe, the European turtle dove was envisaged as the devoted partner of the Phoenix. Robert Chester's poem Love's Martyr is a sustained exploration of this symbolism. It was published along with other poems on the subject, including William Shakespeare's poem "The Phoenix and the Turtle" (where "turtle" refers to the turtle dove).

The turtle dove is featured in a number of folk songs about love and loss. One of these is a setting by Ralph Vaughan Williams.

Turtle doves also are featured in the song, "The Twelve Days of Christmas", as the gift "my true love gives to me" on the second day of Christmas. If added cumulatively, by the end of the song, the recipient has been given 22.

Turtle doves appear in the title and lyrics of a spiritual from the Georgia Sea Islands.

All content from Kiddle encyclopedia articles (including the article images and facts) can be freely used under Attribution-ShareAlike license, unless stated otherwise. Cite this article:
European turtle dove Facts for Kids. Kiddle Encyclopedia.