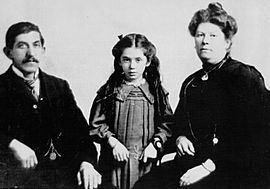 Eva's father Benjamin (who disappeared aboard the Titanic), herself and her mother Esther, 1910

Eva Miriam Hart (January 31, 1905 – February 14, 1996) was an RMS Titanic survivor. She was seven years old when she and her parents, Benjamin and Esther, boarded Titanic. Hart was sleeping when the Titanic hit an iceberg at 11:40 PM.

Hart and her mother were picked up by RMS Carpathia.

Hart was born in Ilford, Essex, England. She died in Chadwell Heath, London, two weeks after her 91st birthday.

All content from Kiddle encyclopedia articles (including the article images and facts) can be freely used under Attribution-ShareAlike license, unless stated otherwise. Cite this article:
Eva Hart Facts for Kids. Kiddle Encyclopedia.