Evant ( EE-vant) is a town in Coryell and Hamilton counties in central Texas, United States. The population was 426 at the 2010 census. The Coryell County portion of Evant is part of the Killeen–Temple–Fort Hood Metropolitan Statistical Area. 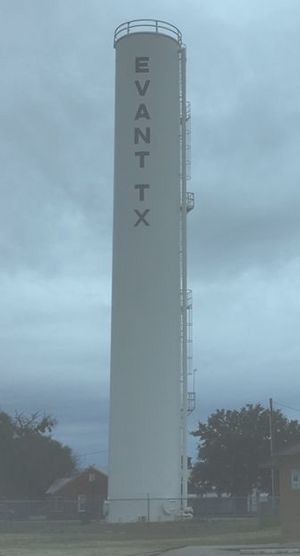 The town of Evant was first a settlement called "Langford Cove", settled by Asa Langford and his family in 1855. Langford served as postmaster in the first post office, named "Cove", established in February 1876. By the late 1850s, Langford had built a general store, a blacksmith shop, and a sawmill near the current site of the town.

Evant continued to grow, reporting a peak population of 550 sometime in the 1950s. The town was formally incorporated in the mid-1970s. Its population at the time was 540 and has continued to shrink. According to the 1990 census, the town's population was 444, and by 2000 it had dropped to 393.

According to the United States Census Bureau, Evant has a total area of 0.62 square miles (1.6 km2), all of it land.

There were 159 households, out of which 33.3% had children under the age of 18 living with them, 49.7% were married couples living together, 11.3% had a female householder with no husband present, and 36.5% were non-families. 34.0% of all households were made up of individuals, and 20.8% had someone living alone who was 65 years of age or older. The average household size was 2.47 and the average family size was 3.25.

The climate in this area is characterized by hot, humid summers and generally mild to cool winters. According to the Köppen Climate Classification system, Evant has a humid subtropical climate, abbreviated "Cfa" on climate maps.

The town is served by the Evant Independent School District and is home to the Evant High School Elks.

All content from Kiddle encyclopedia articles (including the article images and facts) can be freely used under Attribution-ShareAlike license, unless stated otherwise. Cite this article:
Evant, Texas Facts for Kids. Kiddle Encyclopedia.