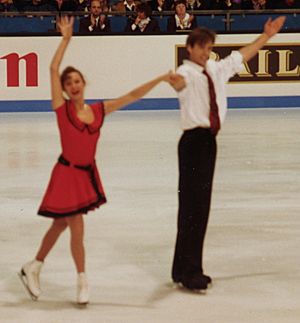 Oksana Grishuk and Evgeny Platov at the 1994 European championships

He was a Russian dancer, and began skating when he was nine years old. He studied at the Physical Institute of Culture in Moscow.

After the 1998 Olympics in Nagano, Japan, Platov started skating as a professional with a different partner, Maya Usova, until he retired from performing in 2002. He is now a coach at Princeton Sports Center in Princeton, New Jersey.

All content from Kiddle encyclopedia articles (including the article images and facts) can be freely used under Attribution-ShareAlike license, unless stated otherwise. Cite this article:
Evgeny Platov Facts for Kids. Kiddle Encyclopedia.