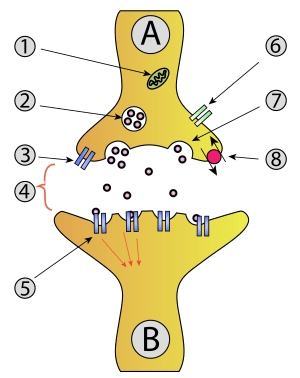 Exocytosis () is a form of active transport in which a cell transports molecules (such as proteins) out of the cell (exo- + cytosis) by expelling them in an energy-using process. Exocytosis and its counterpart, endocytosis, are used by all cells because most chemical substances important to them are large polar molecules that cannot pass through the hydrophobic portion of the cell membrane by passive means.

In exocytosis, membrane-bound secretory vesicles are carried to the cell membrane, and their contents (water-soluble molecules such as proteins) are secreted into the extracellular environment. This secretion is possible because the vesicle transiently fuses with the outer cell membrane.

Exocytosis is also a mechanism by which cells are able to insert membrane proteins (such as ion channels and cell surface receptors), lipids, and other components into the cell membrane. Vesicles containing these membrane components fully fuse with and become part of the outer cell membrane.

In multicellular organisms there are two types of exocytosis: 1) Ca2+ triggered non-constitutive (i.e., regulated exocytosis) and 2) non-Ca2+ triggered constitutive. Exocytosis in neuronal chemical synapses is Ca2+ triggered and serves interneuronal signalling. Constitutive exocytosis is performed by all cells and serves the release of components of the extracellular matrix, or just delivery of newly synthesized membrane proteins that are incorporated in the plasma membrane after the fusion of the transport vesicle. Regulated exocytosis, on the other hand, requires an external signal, a specific sorting signal on the vesicles, a clathrin coat, as well as an increase in intracellular calcium. Exocytosis is the opposite of endocytosis. 3) Vesicular exocytosis in prokaryote gram negative microbes is the latest finding in exocytosis. Herein, periplasm of gram negative microbes is pinched off as bacterial outer membrane vesicles (OMVs) for translocating microbial biochemical signals into eukaryotic host cells or other microbes located nearby, accomplishing control of the secreting microbe on its environment - including invasion of host, endotoxemia, competing with other microbes for nutrition, etc. This finding of membrane vesicle trafficking occurring at the host-pathogen interface also dispels the myth that exocytosis is purely a eukaryotic cell phenomenon.

Five steps are involved in exocytosis:

Certain vesicle-trafficking steps require the transportation of a vesicle over a moderately small distance. For example, vesicles that transport proteins from the Golgi apparatus to the cell surface area, will be likely to use motor proteins and a cytoskeletal track to get closer to their target. Before tethering would have been appropriate, many of the proteins used for the active transport would have been instead set for passive transport, because the Golgi apparatus does not require ATP to transport proteins. Both the actin- and the microtubule-base are implicated in these processes, along with several motor proteins. Once the vesicles reach their targets, they come into contact with tethering factors that can restrain them.

It is useful to distinguish between the initial, loose tethering of vesicles to their objective from the more stable, packing interactions. Tethering involves links over distances of more than about half the diameter of a vesicle from a given membrane surface (>25 nm). Tethering interactions are likely to be involved in concentrating synaptic vesicles at the synapse.

Secretory vesicles transiently dock at the cell plasma membrane, preceding the formation of a tight t-/v-SNARE complex, leading to priming and the establishment of continuity between the opposing bilayers.

In neuronal exocytosis, the term priming has been used to include all of the molecular rearrangements and ATP-dependent protein and lipid modifications that take place after initial docking of a synaptic vesicle but before exocytosis, such that the influx of calcium ions is all that is needed to trigger nearly instantaneous neurotransmitter release. In other cell types, whose secretion is constitutive (i.e. continuous, calcium ion independent, non-triggered) there is no priming.

Transient vesicle fusion is driven by SNARE proteins, resulting in release of vesicle contents into the extracellular space (or in case of neurons in the synaptic cleft).

The merging of the donor and the acceptor membranes accomplishes three tasks:

Examination of cells following secretion using electron microscopy demonstrate increased presence of partially empty vesicles following secretion. This suggested that during the secretory process, only a portion of the vesicular content is able to exit the cell. This could only be possible if the vesicle were to temporarily establish continuity with the cell plasma membrane, expel a portion of its contents, then detach, reseal, and withdraw into the cytosol (endocytose). In this way, the secretory vesicle could be reused for subsequent rounds of exo-endocytosis, until completely empty of its contents.

All content from Kiddle encyclopedia articles (including the article images and facts) can be freely used under Attribution-ShareAlike license, unless stated otherwise. Cite this article:
Exocytosis Facts for Kids. Kiddle Encyclopedia.