Frank William Taussig (1859–1940) was an American economist who is credited with creating the foundations of modern trade theory. 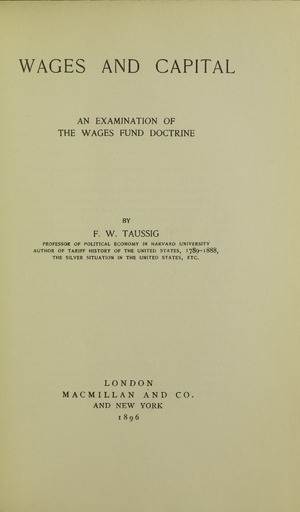 He was born on December 28, 1859, in St. Louis, Missouri, the son of William Taussig and Adele Wuerpel. His parents encouraged his literary and musical interests, and he played the violin at an early age. He was educated in the St. Louis public schools and at Smith Academy in that same city. He then went to Washington University there but, after a year transferred to Harvard from where he graduated in 1879.

He traveled in Europe for a year, taking some time to study economics at the University of Berlin. He then did graduate work at Harvard in law and economics while he was secretary to President Charles W. Eliot for some years.

He got a law degree in 1886 and was appointed assistant professor at Harvard. He became professor of economics in 1892, and he remained at Harvard for the balance of his professional career except for several years spent in federal service and some time spent traveling in Europe recovering from a nervous disorder.

In a 1912 article in The Quarterly Journal of Economics, Taussig favored protecting the beet sugar industry with a tariff on sugar imports. A beet sugar industry gives intangible benefits by adding to the versatility and capabilities of American agriculture. Unskilled labor gains employment in the labor-intensive beet sugar sector of agriculture. Beet sugar grows best in cool climates of the irrigated regions of Colorado, Utah, Idaho, Montana, and California.

In March 1919, he was called to Paris to advise in the adjustment of commercial treaties, and in November, on invitation of Woodrow Wilson, he attended the second industrial conference in Washington, DC, for promoting peace between capital and labour. He was a strong supporter of the League of Nations.

He died on November 11, 1940, aged 80, in Cambridge, Massachusetts. Taussig is buried in Mount Auburn Cemetery in Cambridge.

The successor to his chair at Harvard was Joseph Schumpeter. In 1888, he married Edith Thomas Guild. One of their four children was Helen B. Taussig (1898–1986), a noted pediatrician and cardiologist. F. W. Taussig's first wife died in 1910, and he married Laura Fisher. 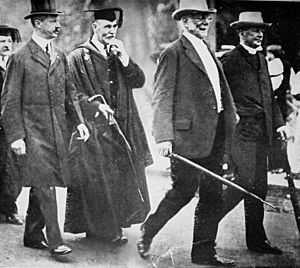 Taussig (second from the left) at the 1911 Harvard commencement

Much of Taussigs work is available from Internet Archive:

All content from Kiddle encyclopedia articles (including the article images and facts) can be freely used under Attribution-ShareAlike license, unless stated otherwise. Cite this article:
F. W. Taussig Facts for Kids. Kiddle Encyclopedia.