FC Biel-Bienne is the most successful football club in the city of Biel/Bienne, Switzerland. The club was founded on 13 November 1896. The club played in a stadium called ‘Jardin Anglais’ at the beginning. They went to the Gurzelen Stadium in the year 1913. There they still play today. The Gurzelen Stadium has a capacity of 15,000.

The club got the name FC Biel-Bienne in 1911. Before they were called ‘Football-Club de Bienne’. During World War I they didn’t play in the league but they did a lot of charity projects. FC Biel-Bienne plays in the Challenge League today. The second best football league in Switzerland.

They moved to the First League in the season 1989/90. This is the best League of Amateur-football in Switzerland. They went to the Challenge League again in 2008. Because the Gurzelen Stadium is very old, FC Biel/Bienne has to play on the ‘Maladière Stadium’ in Neuenburg. But the club can come back in 2014 because the new stadium is going to be built. It will be opened in 2015.

The president of the FC Biel-Bienne is Jean-Marc Hofstetter. He became president in 2013. Before it was Jean-Pierre Senn. The coach of the club is Phillipe Perret. 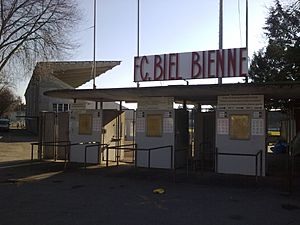 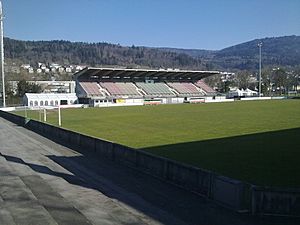 All content from Kiddle encyclopedia articles (including the article images and facts) can be freely used under Attribution-ShareAlike license, unless stated otherwise. Cite this article:
FC Biel/Bienne Facts for Kids. Kiddle Encyclopedia.