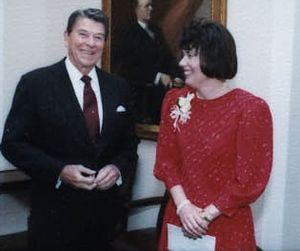 Whittlesey with President Ronald Reagan in 1985

Faith Ryan Whittlesey (February 21, 1939 – May 21, 2018) was an American Republican politician and White House Senior Staff member. She was born in Jersey City, New Jersey. She served in the Pennsylvania House of Representatives from 1973 to 1976.

Whittlesey served as the United States Ambassador to Switzerland from 1981 to 1983 and again from 1985 to 1988 under the Ronald Reagan administration.

All content from Kiddle encyclopedia articles (including the article images and facts) can be freely used under Attribution-ShareAlike license, unless stated otherwise. Cite this article:
Faith Whittlesey Facts for Kids. Kiddle Encyclopedia.