Fancy Farm is an unincorporated community and census-designated place in Graves County, Kentucky, United States, 10 miles (16 km) northwest of the county seat, Mayfield. As of the 2010 census it had a population of 458.

Fancy Farm is on Kentucky Route 80 in the rural western portion of the state called the Jackson Purchase. It was settled by Roman Catholics starting in 1829, and is known for its strong Catholic community. The community grew around St. Jerome Church, built in 1836. The first post office opened in 1843. The colorful name was apparently chosen when the post office opened, by a man who was applying to be postmaster. It was first mentioned in the U.S. Census in 1870 as a post office in Boswell Precinct; first mentioned as a town in Magisterial District 5 in the 1910 census; and finally enumerated as a town in its own precinct in the 1920 census. 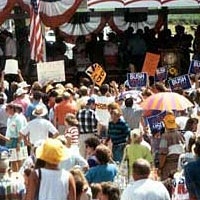 A crowd gathers to hear a stump speech at the Fancy Farm picnic.

The village is the site of the annual St. Jerome Catholic Church Picnic, famous as a traditional political gathering attracting statewide and occasionally national candidates. The picnic began in 1880 as a purely local affair. It takes place on the grounds of St. Jerome Catholic Church. Since 1956 it has been held on the first Saturday in August. It has come to represent the traditional starting point of the fall campaign season in Kentucky.

The picnic was of purely local interest until A. B. "Happy" Chandler (best known for being the second Commissioner of Major League Baseball) began making appearances, going for the first time in 1931 while running for Lieutenant Governor.

So many Kentucky politicians attend that it tends to only be news when a major politician decides not to make an appearance, such as senator Jim Bunning in 2007. National figures who have made speeches include George C. Wallace and Al Gore. Vice President Alben Barkley spoke many times over the years.

In addition to the political appearances, the picnic offers traditional fair activities such as bingo games and raffle prizes. Food includes barbecue, a Knights of Columbus fish fry and homemade baked goods. The event was recognized in the 1985 Guinness Book of World Records as the "World's Largest Picnic", for the consumption of 15,000 pounds of mutton, pork, and chicken at the 1982 picnic.

The picnic proceeds are used to finance local improvements. No outside vendors participate, and about 12,000 to 15,000 people attend each year.

All content from Kiddle encyclopedia articles (including the article images and facts) can be freely used under Attribution-ShareAlike license, unless stated otherwise. Cite this article:
Fancy Farm, Kentucky Facts for Kids. Kiddle Encyclopedia.