Mayfield is a home rule-class city in Graves County, Kentucky, in the United States. It is the seat of its county. The population was 10,024 as of the 2010 U.S. census.

Mayfield is in the center of the Jackson Purchase, an eight-county region purchased by Isaac Shelby and Andrew Jackson from the Chickasaw people in 1818. Mayfield was established as the county seat of Graves County in 1821, and the county was formally organized in 1823. John Anderson is believed to have been the first settler, arriving in 1819 and building a log home on Mayfield Creek. In December 1821, Anderson was appointed county court clerk and moved about two and a half miles to the site that became Mayfield. According to Trabue Davis, the town's name originates indirectly from a gambler named Mayfield, who was kidnapped about 1817 at a racetrack near what is now Hickman. He was carried to the site of today's Mayfield, where he carved his name into a tree in hopes that someone would see it. He then tried to escape, but he drowned trying to cross what is now called Mayfield Creek. The future town got its name from the creek. 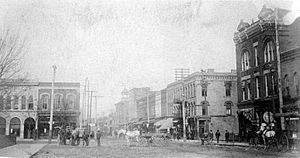 The completion of the Memphis, New Orleans, and Northern Railroad in 1858 connected Mayfield with the outside world. Beginning with the Mayfield Woolen Mills in 1860, manufacturing clothing became the main industry in Mayfield for the next hundred years. The town was also a major market for loose-leaf tobacco.

During the Civil War, the Jackson Purchase including Mayfield strongly supported the Confederate cause. The Jackson Purchase has even been called "Kentucky's South Carolina". On May 29, 1861, a group of Southern sympathizers from Kentucky and Tennessee met at the Graves County Courthouse to discuss the possibility of joining the Jackson Purchase to West Tennessee. Most records of the event are lost, probably due to an 1887 fire that destroyed the courthouse. In 1907, Fulton County judge Herbert Carr recalled that the Mayfield Convention adopted a resolution for secession, and a historical marker in front of the courthouse now proclaims this as fact. However, records of the meeting kept by a Union sympathizer do not mention any such resolution, and historian Berry Craig argues that the convention believed Kentucky would eventually secede and a resolution to break away was unnecessary. Surviving records do show that the convention adopted resolutions condemning President Abraham Lincoln for "waging a bloody and cruel war" against the South, urging Gov. Beriah Magoffin to resist Union forces and praising him for refusing to answer Lincoln's demand for soldiers. They also condemned the Federal government for providing "Lincoln guns" to Union sympathizers in eastern Kentucky. The convention nominated Henry Burnett to represent Kentucky's First District in Congress. The Mayfield Convention was followed by the Russellville Convention, which created the provisional Confederate government of Kentucky.

Following the war, these southern sympathies were demonstrated by the long dominance of the Democratic Party in local elections. During the Civil Rights Movement, the local schools were slow to integrate, but they finally did so without violence. The "Mayfield Ten", ten black students from the segregated Dunbar High School, were allowed to register at all-white Mayfield High School in 1956.

On May 10, 2016, an EF3 tornado passed just north of the city limits. There were ten injuries.

The climate in this area is characterized by hot, humid summers and generally mild to cool winters. According to the Köppen Climate Classification system, Mayfield has a humid subtropical climate, abbreviated "Cfa" on climate maps.

There were 4,358 households out of which 26.9% had children under the age of 18 living with them, 42.4% were married couples living together, 15.6% had a female householder with no husband present, and 38.8% were non-families. 35.3% of all households were made up of individuals and 18.9% had someone living alone who was 65 years of age or older. The average household size was 2.27 and the average family size was 2.89.

Despite being in a dry county (Graves), sales by the drink in restaurants of the city limits of Mayfield seating at least 100 diners and at the Mayfield Golf & Country Club are allowed. There are no Sunday sales of alcoholic beverages permitted, except at Mayfield Golf and Country Club.

All content from Kiddle encyclopedia articles (including the article images and facts) can be freely used under Attribution-ShareAlike license, unless stated otherwise. Cite this article:
Mayfield, Kentucky Facts for Kids. Kiddle Encyclopedia.