Farm River is a south-flowing river located entirely within the U.S. state of Connecticut. Because it begins as freshwater in its northern reaches and flows into tidal salt water at Long Island Sound, Farm River is by definition an estuary. The river is 16.5 miles (26.6 km) long. 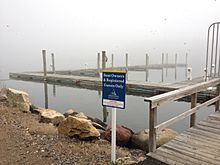 From its northern reaches, the river flows southward into the town of East Haven where it becomes the dividing line between East Haven and Branford. Along its route, the river supplies water via tunnel to Lake Saltonstall, a public water source owned by the South Central Connecticut Regional Water Authority. Near the river's mouth it flows past Farm River State Park.

All content from Kiddle encyclopedia articles (including the article images and facts) can be freely used under Attribution-ShareAlike license, unless stated otherwise. Cite this article:
Farm River (Connecticut) Facts for Kids. Kiddle Encyclopedia.