Fatima Bhutto (born 1982) is a young Pakistani poet and writer. Her main published works so far are Whispers of the Desert (Poems, 2006), Songs of Blood and Sword (Memoirs, 2010) and The Shadow of the Crescent Moon (Fiction, 2013). Her writing is serious and make readers think about social problems and issues facing developing countries like Pakistan. She also writes about the traditional male-dominated rural society and how women are abused and treated with cruelty in such a setting. 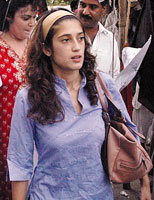 All content from Kiddle encyclopedia articles (including the article images and facts) can be freely used under Attribution-ShareAlike license, unless stated otherwise. Cite this article:
Fatima Bhutto Facts for Kids. Kiddle Encyclopedia.