The original 1931 building, designed by the noted Cleveland architecture firm Walker and Weeks, was seven stories tall, and a 10-story addition to the structure was completed in 1958 with roughly 200,000 square feet of total space. The Art Deco facade of the original Georgia marble building is ornamented with three cast aluminum figures, representing mining, agriculture and commerce, by the New York sculptor Henry Hering. The building was listed as a Pittsburgh History & Landmarks Foundation Historic Landmark in 2001.

For decades the Pittsburgh branch office of FRB Cleveland shared responsibility with FRB Minneapolis for processing all US Savings Bond transactions, this service being provided by the Federal Reserve System to the US Treasury. Employees at the complex numbered 300-350 in total. With the increase in electronic processing, the US Treasury determined that reduced staffing and only one Federal Reserve site was required for such services, and the operation in Minneapolis was named as the sole site. Pittsburgh branch staff was reduced during 2011-2012 from about 320 to 25 in three separate layoffs. 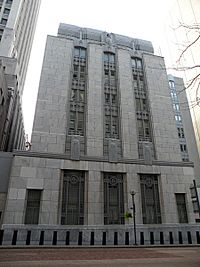 Federal Reserve Bank of Cleveland Pittsburgh Branch, built from 1930 to 1931, located at 717 Grant Street in Downtown Pittsburgh and home to the bank until October, 2012.

In October 2012 the Reserve branch office relocated to

M&J Wilkow purchased the building for $3.75 million in July 2013, and sold it for an undisclosed amount to Drury Hotels, which expects to reopen the conveyed building as a hotel in mid-2016.

Current Board of Directors

The following people are on the board of directors as of 2020:

Appointed by the Federal Reserve Bank

Appointed by the Board of Governors

All content from Kiddle encyclopedia articles (including the article images and facts) can be freely used under Attribution-ShareAlike license, unless stated otherwise. Cite this article:
Federal Reserve Bank of Cleveland Pittsburgh Branch Facts for Kids. Kiddle Encyclopedia.